The $120 Breakfast: A Meal For Golfers Everywhere 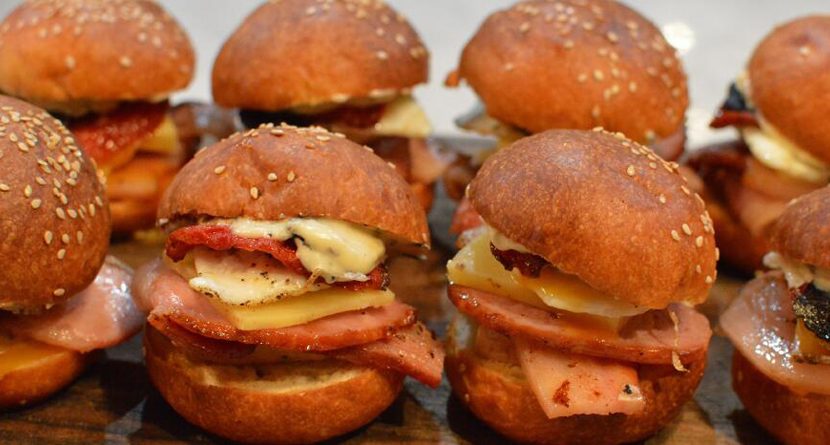 Previous Page: Who Is David Lingmerth?

What’s your typical go-to breakfast before a round of golf?

Ours is the old standby: An egg sandwich, consisting of two fried eggs, cheese and a slice or two of bacon between two halves of a bagel. Throw in a cup of coffee and perhaps an energy bar and we’re good to go.

If we prepare this morning staple at home the cost would probably amount to something like $2. Maybe less if we use frozen bagels. If we wake up late and have to stop somewhere on the way to the course to pick one up, we’d pay somewhere in the vicinity of $5.

For those folks living in Sydney, Australia, there’s another option.

But before you say “overpriced,” have a look at the ingredients in this slice of heaven, according to UPI:

The sandwich features award-winning bacon from Slade Point Meat Specialists in Mackay, Queensland, a pan-fried duck egg, semi-dried and smoked gourmet truss tomatoes, duck foie gras, caviar, creme fraiche, shaved truffles and English cheddar, squeezed between a handmade brioche bun. It will be served with a side of chips and shaved truffle aioli.

Yeah, that sounds way better than our homemade concoction.

The only problem is that the thing costs more than our round of golf, mid-round hotdog and drink, and post-round visit to the 19th hole combined.

And the sandwich doesn’t take five hours to eat.

Still, we’d like to sink our teeth into this culinary creation and see what all the fuss is about. If the owners of 4Fourteen are reading this, feel free to send one our way over here in the states so we can “write a review.”

Here are a few other expensive breakfasts available to golfers (and everyone else): Despite its name, this dish — which is essentially an omelet — comes with a price tag of $1,000. That’s a lot more reasonable than a zillion dollars. What makes it so expensive? A bed of fried potatoes is smothered with one pound of lobster meat, egg and 10 ounces of caviar. To you caviar eaters out there, can you really stomach 10 ounces of the stuff? That’s a lot of fish eggs.

This breakfast is considered by the Guinness Book of World Records to be the most expensive omelet on the planet. Bacon lovers can now flock to this town in western England to try this sandwich that first appeared on Tangberry’s menu earlier this year. According to the Huffington Post, eggs and “rare breed bacon,” along with black truffles, truffle oil, golf leaf, gold dust and saffron, are slapped between two halves of a roll to create this sandwich.

Who actually eats gold? If we ordered this thing, we’d keep the gold and then head down to the local pawn shop to cash it in. For those of you that like steak and eggs in the morning, this meal has half of that. The cheesesteak is made with Wagyu ribeye, foie gras, and truffled cheese whiz, and is served on a fresh baked sesame roll.

Surprisingly, this is not the most expensive item on the menu at the exclusive steakhouse. We’re not sure if eating a giant cheesesteak would provide you with much energy before a round of golf, but it might be worth a try. Someday.

Next Page: A Fashionable Wedding