The Academy Awards for Golf Movies 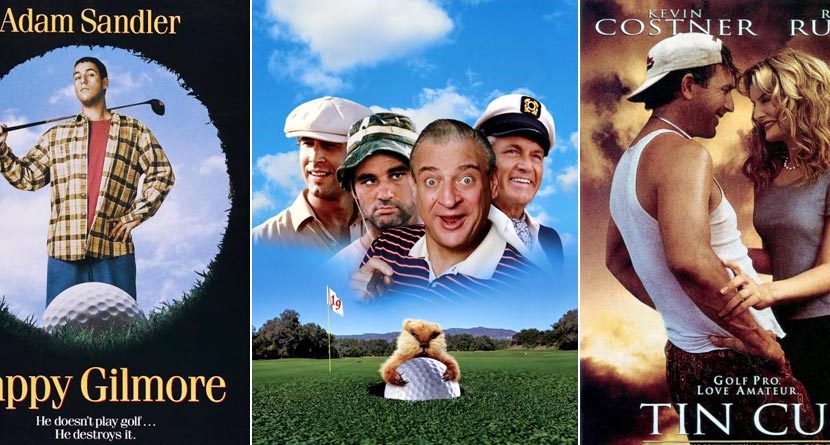 It’s that time of year again, where the best and brightest in Hollywood get together and pat each other on the back for all their amazing work over the past year. I know that sounds a little cynical but they do tend to consistently snub a lot of deserving movies.  (I’m still mad that Up in the Air went home empty handed in 2010. Alas, I digress.)

Since sports movies rarely seem to get the Oscar treatment, I decided to take it upon myself and give the best golf flicks their due in the style of the Academy Awards. Here are the nominees: Some of these are more classic than others, but they all certainly deserve some recognition. Happy Gilmore has seven nominations, Tin Cup has nine while the legendary comedy Caddyshack has six in this contest. It’s no surprise that these three heavyweights are at the head of the golf movie class.

Let’s see who the winners are…

Best Actor: Kevin Costner – Tin Cup
The competition here was stout, but not from who you might think. Costner’s closest competition here, in my opinion, was Randy Quaid in Dead Solid Perfect. Quaid did a remarkable job portraying a pro golfer. His mechanics are probably the best of all the nominees, which scores major points with me.

That being said, Kevin Costner did a very good job developing a swing for the roll. He turned down all offers to have someone else hit the shots for him, which, to me, is quite commendable. Costner brought the character of Roy “Tin Cup” McAvoy to life in such a way that he still lives on at driving ranges and municipal tracks all over.

Hepburn’s interest in the game was captured in the 2004 film, The Aviator, during a scene where she (played by Cate Blanchett) played golf with Howard Hughes.

Best Supporting Actor: Bill Murray – Caddyshack
This was, by far, the most difficult category to narrow down let alone choose a winner. I went with Bill Murray because his performance in Caddyshack is the stuff of legends and still manages to define a career that has included an Oscar nomination for his roll in Lost in Translation.

Since Caddyshack, Murray has put together an impressive resume and has managed to become an enigma off the screen. To this day, as great as Groundhog Day, Lost in Translation, all his off-beat work in Wes Anderson’s quirky classics and Stripes are, people still want to hear about the “Cinderella story.”

Best Supporting Actress: Julie Bowen – Happy Gilmore
Nowadays Julie Bowen is known as Claire Dunphy on ABC’s wildly successful “Modern Family,” but before that, she was Happy Gilmore’s love interest. Her performance as Virginia Venit is arguably the best “Gilmore Girl” performance of any, except for maybe Bridget Wilson-Sampras in Billy Madison.

Best Director: Harold Ramis – Caddyshack
Ramis was the runaway winner in this category for couple of reasons but the mostly because of the hectic nature of the production. If you take the time to watch any documentary on the making of Caddyshack, you’ll hear tales about bickering stars, improvisation and a mechanical gopher. You’ll also hear about mayhem with golf carts after dark and starlets who don’t want to take their clothes off. It takes someone with incredible leadership abilities and vision to harness that energy and put together a film as good as Caddyshack and that’s why Harold Ramis wins Best Director.

Best Original Screenplay: John Norville, Ron Shelton – Tin Cup
I know some might think this is an upset and Caddyshack should have won best original screenplay. Caddyshack was great but much of it was improvised. Some of the greatest scenes were written on the fly or created in the moment by the stars. Ron Shelton, who wrote Tin Cup, also wrote Bull Durham, White Men Can’t Jump, Cobb and Blue Chips.

Having spent five years in the Baltimore Orioles organization when he was younger, Shelton knows the ups and downs of life as professional athlete and that’s what makes him the best sports movie writer and director we’ve ever seen.

Best Adapted Screenplay: Mark Frost – The Greatest Game Ever Played
Everyone knows the story of Francis Ouimet, the last amateur to win the U.S. Open, but until Mark Frost wrote the book and screenplay and director Bill Paxton brought it to life, it was simply a story for the history books. The vision of Frost and Paxton helped create the best golf movie since Tin Cup and gave everyone a spectacular portrayal of the the time period and the player.

Obviously, best cameo isn’t an actual category at the Academy Awards, but in golf movies, there seems to be a number of them and I wanted to recognize the best. In this case, it truly is an honor to just be nominated.

Best Picture: Tin Cup
While many of you will scream that Caddyshack is the better movie, you’d be wrong. Don’t get me wrong, it’s great, but if you’re talking all-around, best golf movie, then you have to go Tin Cup, and here’s why. Tin Cup gives you everything you’d want. Great characters, great lines, good drama and a love story without it being annoying.

Caddyshack is just balls-to-the-wall funny. I have nothing against a rip-roaring comedy as I quite enjoy Caddyshack and the brand of often inane humor that it spawned, but if I’m talking about a great movie, I want one that makes me a little nervous for the hero.

I love that Roy McAvoy doesn’t win the U.S. Open. I love that David Simms (Don Johnson) can’t take a risk and never grows as a character. The story line and the golf (mechanics and otherwise) is what separates Tin Cup from Caddyshack. Kevin Costner looks more like a tour pro than Chevy Chase and I believe Roy McAvoy is a legendary ball striker more than I do that Danny Noonan has the potential to be a real stick. For me, authenticity and attention to detail are very important, and Tin Cup got that.

Like the real Academy Awards, this list  is totally arbitrary. I’m sure everyone had their opinions and these are just mine. If you disagree, tell me why. I’m all ears.