The Cup Inside The Cup: Fan Cheers On The First Tee 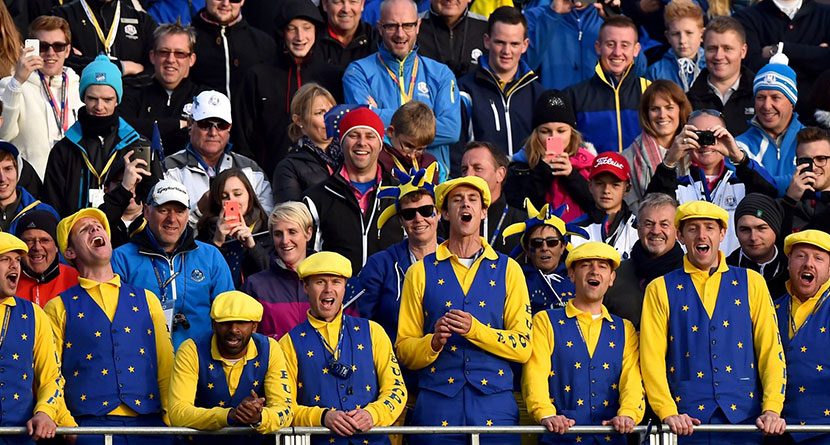 While the Ryder Cup is undoubtedly settled inside the ropes and on the golf courses, two groups of partisan fans have taken the competition to the grandstands. Europe’s “Guardians of the Ryder Cup” and the “American Marshals” will face off once again in a biennial match of their own on the first tee.

Christopher Clarey of The New York Times took a dive into the two groups of friends who have turned a buddy’s trip into one of the highlights of the matches.

At Hazeltine, they will have considerable competition in the golf-glee-club department. An American cheer squad, called the American Marshals and inspired by the Guardians, will be doing its own serenading at the first tee, with its focus on the United States team.

With Hazeltine only 20 miles or so southwest of Minneapolis, the Guardians will tee up some Prince (“Could his be the most beautiful swing in the world? He’s the reason that God gave us golf, Rory Mc-Il-roy”). The Marshals might respond with “God Bless America.”

Consider this a cup within the Cup, and it will not be contested solely in the grandstand. The two groups will engage in some match-play golf of their own at nearby Medina Golf and Country Club on Thursday, shortly before the real Ryder Cup opening ceremony.

While the golf world’s attention will turn to the golf being played at 8:30 a.m. on Friday morning, the lead-up to the first ball being struck will cast the spotlight on the dueling glee clubs.