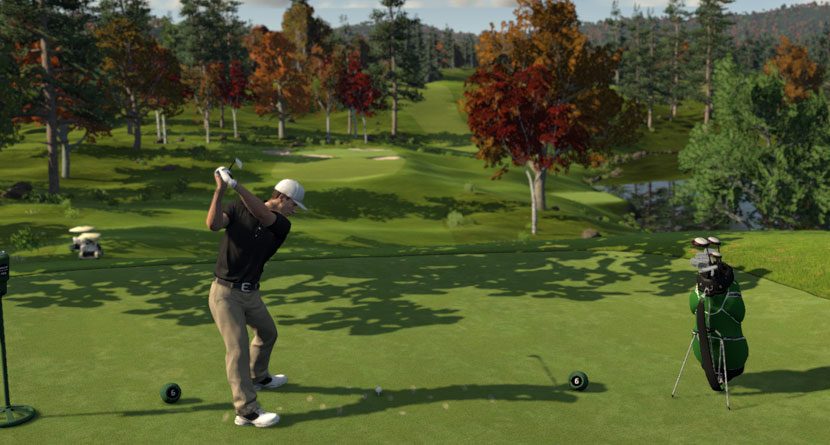 “The Golf Club” by HB Studios broke ground for golf games on next-generation systems, giving gamers their first chance to hit the links on Xbox One and PlayStation 4. The game boasts an extensive course designer and a realistic golf simulator, offering something completely different than golf games of the past.

“The Golf Club” strips everything out of the typical golf video game that you’re used to playing. Its minimalist presentation shies away from displaying a power meter and other distracting elements, showing you only what’s necessary. You won’t see EA Sports’ famous “putt preview” in this game, and that’s the way it should be. There’s nothing realistic about seeing the break of a putt before hitting it.

However, the lack of visual assistance is also one of the downsides of the game. The absence of a tutorial makes for a difficult learning curve from golf games we’re used to. The first few rounds were challenging to say the least, but it got easier with time. Once I managed to figure out how hard to flick the right-stick for each shot, or how to read 10-foot breakers, my scores (and putts) began to drop.

But that’s not to say the game was easy by any means. Factors such as a sidehill lie or your ball sitting down in the deep rough drastically impact the flight of your ball, just as they would in real life. Being an avid golfer, that’s something I enjoy seeing in a video game.

Increasing or decreasing the loft of each shot makes the “sweet spot” smaller, making little imperfections in your swing path more exaggerated. As with every video game, this takes some getting used to, and the more you play, the more accurate your shots will be. Just don’t try hitting a sky-scraping sandwedge right off the bat.

Going from having nearly every golf brand in your arsenal, to having nameless golfers and apparel is quite the change to endure. Even for non-golfers.

But the game makes up for it with its insane course designer. And by insane I mean insanely good. When you jump into the Greg Norman Course Designer, you’re able to choose between five themes: Rural, Alpine, Autumn, Desert, and Links. Then, as a basic starting point, you’re presented with terrain options such as the amount of water, trees, and hills. And after choosing the number of holes and difficulty, you’re ready to design. There’s not much that you can’t do when it comes to creating your own course. You’re free to create 18 island greens if you’d like, or put a boat on every hole. And the key to this mode is to experiment and explore. With no tutorial to guide you, the best way to uncover the many layers to designing a course is to try different things. Create a 13-hole course, shrink the green sizes, make a course entirely made up of par-5s.

Just about anything you can think of, you can do. So take advantage of it.

When you’re done creating your dream — or nightmare — course, show it off. You can publish your masterpiece for other users to try, which creates an enormous database of user-created playable courses.

As a whole, “The Golf Club” certainly satisfies my need for a golf video game. And coming in below the typical video game price tag at $35, makes it’s well worth considering. The infinitely-large number of playable courses will keep you coming back for more, and the life-like struggle of having a tough round followed by a great one is addicting. Not to mention, you could easily spend a few days designing replica courses such as Pinehurst No. 2 or Pebble Beach, if you so choose.