The Golf Course In No-Man’s Land 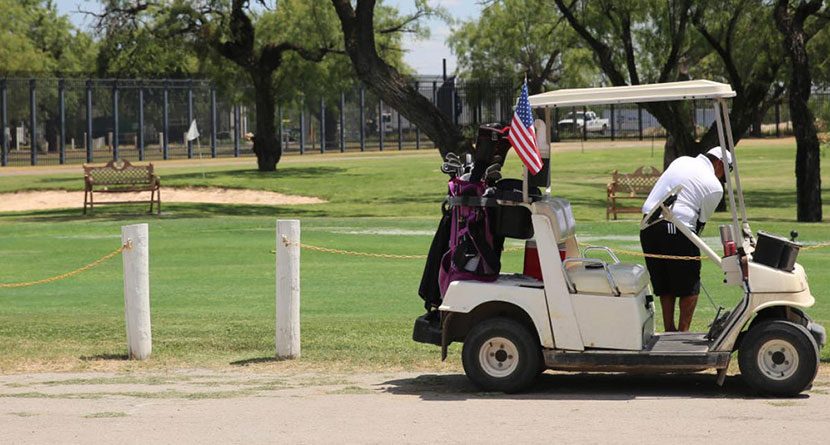 While border control and walls have been a hot topic this political season, one thing people of all political affiliations can agree upon is the right to play a great golf course. Eagle Pass Golf Course has a unique and interesting history.

Fusion.net has the story.

When the project to build the fence was first proposed in 2008, Eagle Pass filed a lawsuit against the federal government in an effort to stop the project. The city ultimately lost the lawsuit and thousands of dollars in the process.


“The federal government was going to come in and get rid of a park that is very important for the city; it’s a recreational space for the community,” says Eagle Pass Mayor Ramsey English Cantu. But the two parties came to an agreement: Shelby Park could stay, but it would be bisected by a border fence. And the golf course had to widen its cart paths so that border patrol vehicles can drive through. So far the only utility that the wall has for the city is to serve as a secure entrance to the park during the festivities and celebrations, such as the 4th of July.

The majority of border residents on both sides are opposed to the construction of fences, according to a survey conducted last April across 14 cities by Cronkite News of The University of Arizona, Univision, and Dallas Morning News.

“The money that was spent on the wall could have been used to hire more border patrol agents, which would’ve been a bigger contribution to the development of the border. The wall did not eliminate the situation we are in,” says the mayor.

Public safety is the main source of employment in Eagle Pass. The Customs and Border Protection agency (CBP) and Immigration and Customs Enforcement agency (ICE) employ around 500 agents here. Cattle and commerce are other major sources of employment, but largely depend on business dealings with the town’s Mexican sister city of Piedras Negras and its surroundings.