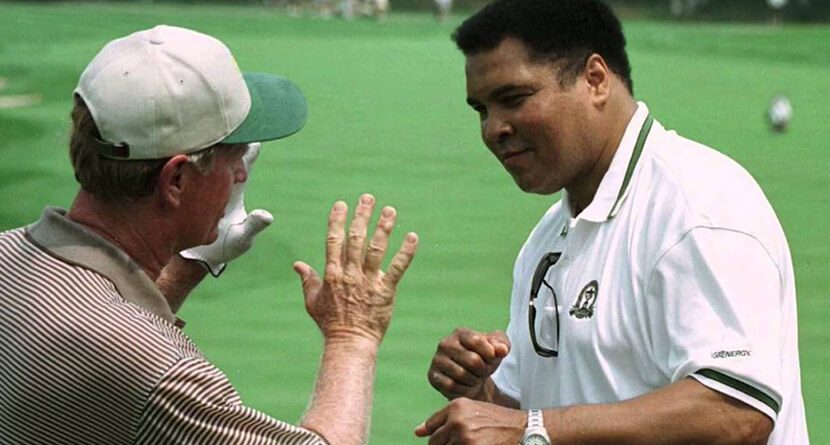 The sporting world lost a giant late Friday night when Muhammad Ali passed away. Typical of when any icon dies, condolences, memories and gratitude comes pouring in from all over the spectrum. Golf was no different.

Although The Champ never really picked up the game, his presence was felt by many of the world’s best golfers. Among the myriad of reaction was a story from Golf Digest in 1973 in which Ali used a golf course as his running route while training for a fight. When he returned from his run, an associate pro at the course asked Ali to take a swing at a few balls. What happened next was quintessential Ali.

Ali told Wilson he’d never swung before at a golf ball, but he agreed to do it. When Wilson handed Ali an 8-iron, the champ asked, “How ya hold this thing?” After putting Ali’s hands on the club in a baseball grip, the next question was “What do I do now?” Brown jumped in with, “Just hit the ball, champ. Just hit the ball.” Wilson added, while pointing the camera at Ali, “Just do whatever feels natural.”

With that, Ali hit what Wilson said was a surprisingly straight, 140-yard shot. Ali crowed, “How ’bout that Angie! You didn’t know I was a champion golfer, did you?” Wilson actually felt that despite the unorthodox look, Ali’s swing had some desirable elements: good shoulder turn, flexed knees, led the downswing with hips and legs, right elbow close to the side, head down, right shoulder lower than the left, and eyes remain fixed on the ball.

Ali hit a second ball solidly and continued his raving glee: “Look at that ball go! Nobody can knock the ball that far. Nobody but me, the great, the one and only Muhammad Ali!” A crowd of people started gathering to watch, and that just fueled Ali’s stage presence. He suddenly jumped away from the ball at one point and raised both hands into the air and crowed, “Muhammad Ali is the world’s greatest golfer! Nobody can beat Muhammad Ali! Not Arnold Palmer, not Jack Nicklaus, not nobody. I’m gonna make ’em look bad, predict the score, how bad I’m gonna beat ’em, everything — just like I do in boxing!” Here are some more tributes levied by golfers on social media.

You’ll always be The Greatest for more than just what you did in the ring. A champion to so many people in so many ways.

It is an understatement to say that today the hearts of the sports world are heavy with the loss of Muhammad Ali. He transcended not only the sport of boxing, but sports in general. He long ago established a legacy that crossed any boundaries of competition or the borders of just our country. He was a global icon. I was incredibly honored and humbled to receive an award in December bearing his name. That night I told a story about how the walls in my home are not for plaques and trophies, but rather for photos of my kids and grandkids. Yet there is one special photo in my office, and that is of Muhammad and me playfully sparring at the PGA Championship in 1996 at Valhalla in his hometown of Louisville. I have always been a great fan of Muhammad, because I admired the champion he was in the ring and the champion he became out of the ring for so many causes. I hope on a day when we mourn the loss of the Champ—the ‘greatest of all time’—we can reflect and appreciate his many contributions past and present, and ensure that generations going forward will admire and be inspired by all that Muhammad Ali accomplished.

He was both brilliant & controversial. He inspired & empowered. We should celebrate his legacy. GOAT. RIP champ. GP pic.twitter.com/BZZNkAbwqb

RIP to the G.O.A.T pic.twitter.com/PYvQqTHVeD

We can’t win every fight but we can try…thank you for the inspiration. #RIPMuhammadAli pic.twitter.com/hmzS4XCE58