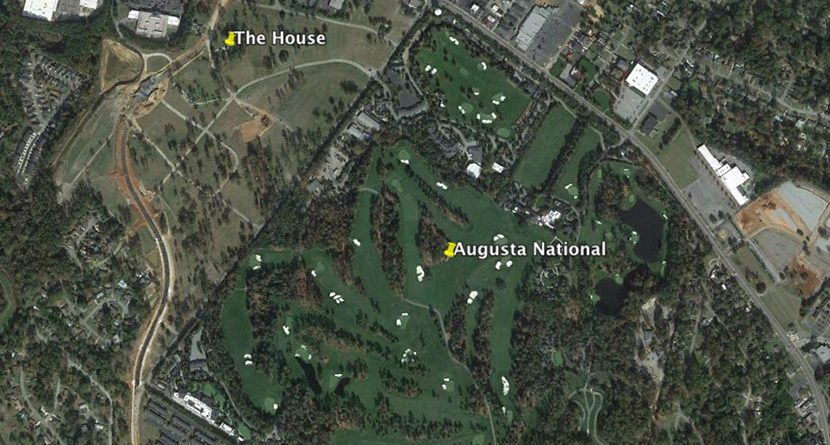 Lengthening the 13th hole. Rerouting Berkmans Road. Buying up property up and down Washington Road.

What did the Counting Crows say? They paved paradise and put up a parking lot. Well, Augusta National has literally been doing that for years. MetroSpirit.com reported last month that the Club has eyes for even more property around Augusta National in the years to come.

As local drivers are just now beginning to get used to traveling up and down the new Berckmans Road as they maneuver through west Augusta, many longtime residents can’t help but slow down and really look at all the changes surrounding the Augusta National Golf Club.

Entire neighborhoods are gone. Many hospitality houses are history. And no one is ever going to make any money parking cars in their front yards during Masters Week again.

Living next to the Augusta National isn’t what it used to be.

Unless you are Herman and Elizabeth Thacker, residents at 1112 Stanley Drive, just off the west side of the ANGC property. It’s said that everything and every person has price, but not the Thackers. At least, not yet.

Augusta National has an incredible way of making things disappear. Trees. Houses. Roads. If the most powerful golf club on earth wants something, it buys it, and it has spent the past 15 years gobbling up the property around its borders.

An entire neighborhood once sat across from Gate 6-A at the Masters. The golf club spent more than $40 million to bulldoze it into a free parking lot, and now all that remains is the simple three-bedroom house at 1112 Stanley Road that Herman and Elizabeth Thacker built in 1959.

Stanley Drive was once part of a nice, if modest, Augusta neighborhood. There were oak trees and backyard swing sets, and it was quiet enough that kids could play in the street without their parents needing to worry.

It was convenient, too. Washington Road, the main commercial center for this Georgia city with just under 200,000 residents, is within walking distance. So is the home of the Masters, which is hidden behind green fences, tall bushes and guard houses.

The Thackers can’t remember exactly when Augusta National started making offers for their neighbors houses, but Elizabeth said that “people went for it big time.” Why not? They were offering about $250,000, good money for the mostly small homes.

The Thackers are one of only a few holdouts left. Typically, the story goes, the family houses that Augusta so desperately wants to buy up and knock down aren’t being sold because the price isn’t right; it’s because of sentimental value. The Thackers admit that more than likely, the “big club” will own their house some day and that’s fine with them.

But they have one sticking point. His name is Scott Brown. He’s a PGA Tour player still trying to qualify for his first Masters. He also happens to be the Thacker’s grandson.

The Thackers like living near the famous golf course. Herman would wake up early during Masters week, rush over and set up his green folding chair near a green, then walk home to make one of his grandsons breakfast. Then, later in the day, they’d both return to watch the best in the world. That grandson took quite a liking to the sport. His name is Scott Brown, and he is now a 32-year-old player on the PGA Tour who is still trying to qualify for his first Masters. If he does, there will be more than one curious reporter walking down the Thackers’ driveway. They plan on being here when it happens.