The Last Time Tiger Woods Wasn’t In the Masters… 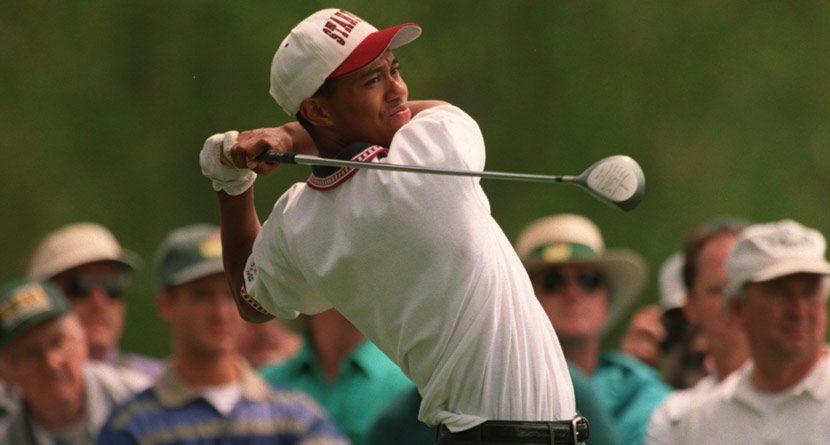 In April 1995, Tiger Woods was just a fresh-faced, 18-year-old kid coming off a dramatic win in the U.S. Amateur. He received his first invite to the Masters Tournament, where in typical Tiger fashion, he turned heads, placed T-41 and was the low amateur.

On Tuesday, after much speculation following his withdrawal from the Arnold Palmer Invitational two weeks ago, we’ve learned that Tiger Woods will not compete in the Masters, marking the first time he won’t appear in the storied event since 1994. The winner that year was Jose Maria Olazabal.

In the 19 years that have passed since the last time Tiger Woods didn’t tee it up at Augusta, much has happened. Make sure you’re sitting down because you’re about to feel old.

– In the fall of 1994, Major League Baseball and the Players Association failed to reach a labor agreement, resulting in a players’ strike that canceled the World Series. It was the first time since 1904 that no series was played. A side note to that: The best team in baseball that year was the Montreal Expos, who don’t even exist anymore.

(P.S. I have no idea who chose to put this montage to Coldplay’s “The Scientist.”)

– O.J. Simpson changed everything about television in 1994. First with his epic high-speed pursuit and dramatic arrest on live TV, and then with the incessant coverage of his murder trial and eventual acquittal. Since then, the hunger for reality TV and up-to-the-second news coverage in America has been nearly insatiable.

– On the day the first round of Woods’ first Masters got underway in 1995 the No. 1 song in the country was “Take a Bow” by Madonna. On the final day of the 1994 Masters, the last one Woods wasn’t at before this year, the top song was “Bump n’ Grind” by R. Kelly.

– “Forest Gump” was the runaway favorite film of 1994, cleaning up at the 67th Academy Awards, winning the Oscar for Best Picture, Best Director and Best Actor among the six total awards it won.

– In 1994, Augusta National didn’t need a cell phone policy because almost nobody had one. With cell phone technology in its infancy, there were no issues with cameras, ringtones or unwanted discussions on the grounds. Nowadays, people carry fully-functioning computers in their pockets and are a royal pain in the you-kn0w-what at tournaments. Ah, simpler times, I guess.

– In May of 1994, Nelson Mandela was elected as the first black president of South Africa. After years of tribulation and imprisonment, Mandela sought to dismantle the apartheid by fighting racism and segregation in the country. He served as president from Jose Maria Olazabal’s first Masters win through his second (1994-1999) and his legacy as “the father of the nation” lives on after his death last year.

– The words blog, tweet, twerk, Google and Wikipedia did not exist.

– Guan Tianlang, the low-amateur at last year’s Masters, who played a practice round with Tiger Woods before the tournament, wouldn’t be born for another three years and six months.

– At the start of the 1994 Masters, Greg Norman was the Official World No. 1 in golf; at the beginning of the 1995 Masters, Zimbabwe’s Nick Price held the distinction.

– The man who helped spark a music revolution, Kurt Cobain, committed suicide two days before the 1994 Masters. Cobain was the brilliant-but-troubled front man of Nirvana, the band that took over the pop-culture landscape with the “grunge” scene in the early 1990s. Its hit “Smells Like Teen Spirit” is now considered “classic” and the band’s drummer, Dave Grohl, continues to wow audiences with his new band, Foo Fighters.

Clearly, times have changed. The one thing that had been constant was Tiger Woods in the Masters. Now, his impressive streak of 19 consecutive Masters Tournaments will come to an end. It was an impressive run, and all of golf will certainly miss his presence this year at Augusta.