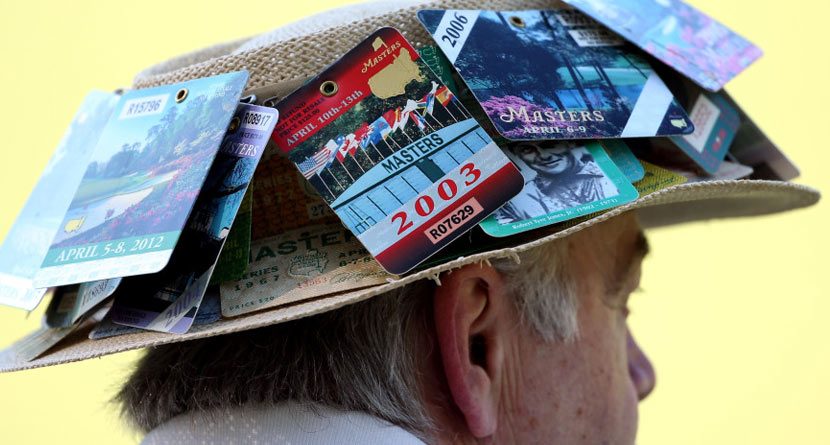 But for those of you who will be making your way to Augusta, I’ve taken the time to get you the skinny from my “guy on the inside” on how to get the most out of your trip to Masters.

There’s An App For That

Like anything else, there’s an app for the Masters. It works on any smartphone and is available through iTunes or the Google Play Store. The app has been around for a couple of years and I used it a lot when I went in 2012. Granted, you can’t bring your phone onto the grounds, but it’s a convenient place to find pairings, news, photos, updates and live radio coverage of the event anywhere you are outside the grounds. It’s even helpful when you’re not in Augusta. I used mine nearly non-stop last year during Masters week while I was golfing in Myrtle Beach.

While it may sound obvious, for some, this tip always seems to fall on deaf ears. Whether we’re talking about getting to Augusta National or headed to the RMV, some people never learn. Don’t be that guy. First of all, the good spots fill up FAST. If it’s not your thing to walk the whole course or follow a couple specific players during their rounds, getting there early is a must. For those of you looking to sit and watch the end of the action but also want to take in as much of the course as possible, this tip is especially important. Most seasoned patrons do this: Buy a chair from the merchandise shop and bring it to where you’d like to watch. Set the chair up and leave it there; no one will take your spot.

Another bonus of getting there early? Short lines at the merchandise shop. Believe it or not, some people acquire badges JUST to buy merchandise. They then re-sell the badges off the grounds to those desperately seeking admission to the tournament. That being said, scalping badges is highly frowned upon and it’s impossible for me to give you an accurate figure you can expect to pay for these (if you’re lucky enough to find them). My insider has said he’s seen them go anywhere from face value to more than a $1,000.

While you might be tempted to get in and hunker down in your spot for the day, that’s not the best way to see the course or the action — especially if this is your first trip to Augusta. Claiming your spot with your chair in the morning is the smartest thing to do, but people file in and out of the popular spots all day and you’ll definitely be able to get in at Amen Corner, the 18th green or on 16 at some point during the day. You may not be front row, but you’ll see more and have a better chance of brushing up next to a tour star during the day.

Also, if you’re not one of the first few 100 in the gates on a given day, you’re probably not going to get as close to Phil or Rory or Tiger as you want to. While Tiger won’t be there this year, the galleries following Rory McIlroy and Phil Mickelson will get deep and get deep fast. Before you know it, you’ll be packed like a sardine and all you’ll see of Phil’s swing is the head of his club for a fleeting moment. If you’re only interested in seeing the big names, your best bet is to hang out at the practice range before and after their rounds or to pick a hole and wait there.

The entire property at Augusta National is scenic. The meticulous attention to detail that is taken by the club to ensure that not one blade of grass is out of place is obvious from the moment you walk through the gates. Because of that, there aren’t too many bad spots to watch from. The ideal spots, for my insider, are around the 18th green (if you’re early enough to claim your space) any day of the week, behind the 12th tee (again, provided you’re early) of Amen Corner, and around the first tee — all prime spots that fill up quickly.

There are some spots that don’t fill up that fast or don’t see too many campers. Perhaps the best is the 10th fairway. The landing zone on the 10th hole is nearly 100 feet below the tee box. It’s a spot with a lot of foot traffic but not very many people hang out there for more than a shot or two. Most are too busy following a group to be bothered with it, but this location gives patrons a chance to have an unobstructed view of their heroes.

The next best place is between the 16th green and 17th tee. If you’re going to camp out, this location will give you the most bang for your buck. From here, you can see 16 green, 17 tee and the par-3 sixth hole. Obviously, what is “prime” location for you depends on who and what you want to see during your visit.

Be Prepared To Climb

Players will tell you there aren’t too many flat lies at Augusta National and the reason for that is the massive elevation changes on the grounds. Sure, you’ve heard about those elevation changes on TV and you’ve seen them in pictures, but no coverage or illustration will do them justice in real life. Someone can tell you a green drops 20 feet from back to front but that’s hard to fathom until you see what it looks like in person.

Remember this: You may not be playing on the course but you will be walking it. Don’t ruin your trip by wearing flip flops, dress shoes, work boots or some other form of unsupportive or cumbersome footwear. Even if it clashes with your ensemble, wear comfortable shoes. If you don’t, the most legendary thing from your trip to Augusta will be your blisters and pulled muscles.

Buying Gifts For Your Friends

If you’re lucky enough to score badges to the Masters and are making the pilgrimage to golf’s Mecca, odds are your friends are, A) incredibly jealous, and B) nicely hounding you to bring something back from the promised land. This can be dangerous. My suggestion? Collect money from friends early. Get wish lists and ask for more money than you think you’ll need to start with. It’s always easier to give back change later than it is to collect the difference.

If you’re not so interested in buying big gifts or don’t have the cash to do so, save your drinking cups. Each beverage at Augusta is served in a hard plastic cup with the tournament’s logo and year branded on it. If you can drink 10 beers, you’ve got 10 souvenirs, and it’ll only set you back about $30. And that price includes the beer you drank. Quite the deal, huh?

You could also buy something like a dozen Masters logo golf balls. Pay the $47.99 and split it between 12 friends. While it would be nice to get everyone a shirt or towel or a replica flag, that’s a lot of junk you’ll be carrying around and a lot of extra scratch that could be spent on you. Remember, it’s your trip, not theirs. Take care of you.

And as was previously mentioned, get there early. You don’t want to miss Phil from the pine straw or Crenshaw rolling one in from 50 feet because you’re standing in a check-out line.

While in the area, you me be tempted to hit the links yourself and there are a few places that provide that opportunity. That being said, they’re probably already booked solid. But hey, it’s worth a shot walking on, right? There are three places in the immediate area that are open for public play during Masters week, just be prepared to pay Masters week prices.

The first course is Forest Hills in Augusta. During Masters week, prices range from $80-140 for a round, most of which include cart, range balls and lunch. With a history dating back to the days of Bobby Jones, Forest Hills is a Donald Ross design, has held numerous amateur tournaments, and is routinely named one of the best public golf courses in the area.

The next option is Goshen Plantation Golf Club, also in Augusta. Greens fees during Masters week are $100 for 18 holes, a cart and range balls. The course is an Ellis Maple design and has been hailed as one of the best public courses and public golf experiences in the state of Georgia.

Finally, there’s Gordon Lakes Golf Club in Fort Gordon, Ga. During Masters week, weekday rates are $90 for 18 holes and a cart. The rate jumps up $10 for Saturday and Sunday. The one thing to be prepared for when you book your time at Gordon Lakes is that the course is part of an active military base and all visitors will be asked to produce an ID before entering the premisses.

When you’re not on the grounds, you’ll probably be looking for something to eat or something fun to do. Besides the golf, there are plenty of places to eat and unwind around the area. You may even run into some caddies and players if you’re lucky.

The first place is an Augusta must. T-Bonz Augusta Steakhouse is a Masters tradition for many. Made famous originally as a favorite of James Brown, the godfather of soul, T-Bonz has continued to be a a favorite due to the “way we run to open the door, work like NASCAR race teams to bus tables and seat, work as a highly motivated unit to get hot, correct orders to tables, continuously look our guests in the eye to make sure they are happy, and say thank you to them on the way out.”

It also helps that the food is top-notch and that celebrities and golfers frequent the restaurant during Masters week. As their website says, “You will see famous golfers who are competing, famous voices and faces who are reporting and commentating on the tournament, hall of fame athletes, superstar filmmakers… as well as the nicest, friendliest, most down-to-earth people from all walks of life.”

Other popular joints are the Surrey Tavern and Sconyers Bar-B-Que. The Surrey Tavern provides nightly live music and as the site says, “was created to entertain Augusta – from the most savvy scotch tipplers to the hip and jubilant imbibers in search of something a little different.”

Sconyers “is the place for real, old fashioned, oak and hickory, pit-cooked bar-b-que” in Augusta. They’re conveniently located off of Bobby Jones Highway and offer both dine-in and take-out services.

Another place to visit is the Augusta Museum of History. While you may not be interested in the integral part that Augusta played in the Civil War due to its prime location, you’ll probably be interested in seeing the golf exhibit there. The exhibit includes an authentic green jacket among its treasures and is a pretty neat way to kill a couple hours in town.