The Masters Tradition You Never Knew: Running* Of The Pros 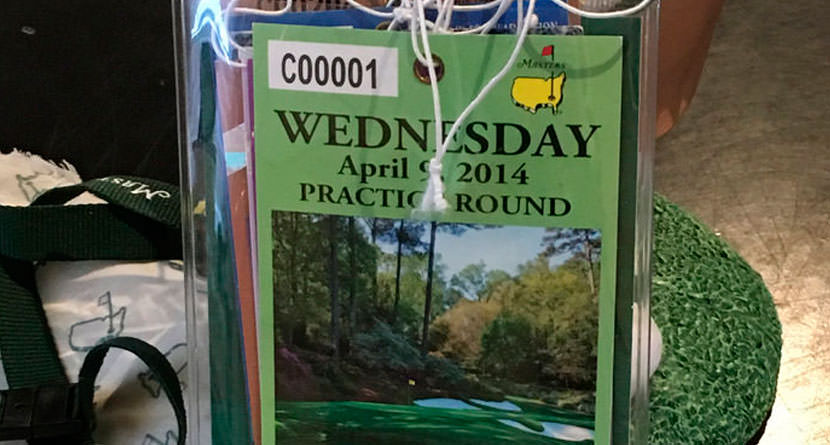 Every year there is a select group of patrons that arrive in Augusta, Georgia without a ticket who will spend the day on the hallowed grounds of Augusta National Golf Club.

How, you ask? By the grace of the tournament committee. That’s right, PGA and LPGA Professionals in good standing are allowed to enter upon showing the proper credentials.

I had heard stories from fellow PGA Pros making the pilgrimage with all accounts seemingly incredulous. There were tales of free parking, beers for a couple bucks, and members happy to be sharing their course with the public. Could it be true? Finally, after three years as a PGA member, the timing was just right, and my life as a golfer and spectator changed forever.

A gap between mini-tour events and a few days without any lessons scheduled (after this experience my schedule was made around Masters week!) gave me the window to make the six-hour sprint up to Augusta. With the only travel plan being “avoid traffic,” the rubber met the road just after 9 p.m.

The drive went well — maybe too well. What do you do in Augusta at 4 a.m.? Still running on adrenaline and with time to burn, I had to fact-check one of the folklores: does John Daly really park an RV at Hooters?

As it turns out, he does.

It seemed too late/early to knock, and Hooters wasn’t serving breakfast, so I carried on.  Gaining confidence that some of the tales could be true, my next stop was to find this “free parking.”

Anyone going for the first time will not believe how close you can drive your vehicle to the property. The average Tour event buses spectators in from miles away, but the greatest of all the tournaments had a precise parking route guiding me, with the assistance of cheerful volunteers, mere steps away from the gates. Parked, exhausted, and accomplished, I reclined my seat overcome with naive accomplishment and unaware of the battle ahead.

Rest did not come easy. After the long drive, the last place you want to be is in the car. What made it worse was being brought back from a light slumber by the occasional car doors slamming and loud chatter around my car.

What the? Who the?

I snapped out of a sleep-deprived stupor to see a small crowd gathering near the corner of Washington Road and a Gate 6 sign. The one thing I had researched was the location and gate PGA pros should access. I was in the right spot and apparently so were others. I got out to stretch and decided the ascension of the sun was the signal to ready for the day. My training day began as soon as I joined the 10 or so others at the corner.

What I noticed first was what I didn’t have. Chief among these things was a Masters chair complete with carrying bag and Masters logo apparel. Nonetheless, I could tell this group was mostly fellow pros, the stories being shared assured me of this. Very nice guys, but as time passed tension grew. More security guards gathered along the road to ensure patrons stayed out of the street and queued up appropriately.

Police officers ushered volunteers and employees to “work” as they burst through what was now a throng of humanity. Our founders club of about 30 or so was positioned shoulder to shoulder along the road, but we were severely outnumbered. Overzealous newcomers looked to break into our ranks and the sense of team was emboldened as we fortified our position.  All of this is done politely, but make no mistake, the guy that woke up late and took time to enjoy the free breakfast at the hotel is looking to capitalize on your generosity. He has a great place in line, right behind you.

With rows of others behind us growing exponentially, the crowd was parceled into sections; groups that would be released or held at the discretion of the guards. Now minutes before the rope keeping the crowd back is dropped, the moment became too much for some. One guy made a run for it, being promptly detained never to be seen again (maybe, I don’t know for sure) and the crowd was reminded – “NO RUNNING.”

In the distance, through a glimmering Augusta morning haze, green-jacketed Members emerged. Joining other volunteers and security guards in the expansive entrance plaza, they placed themselves like the final pieces on a chess board. As the haze continued to clear the previously concealed white ticketing pagodas now shown prominently, signaling the finish line. I drew my gaze back from the ticketing checkpoint just in time to realize what was happening.

The time was now.

The rope was being gathered at our corner and the officer said calmly, as to not incite a riot, “go ahead.”

I did not know it at the time, but I was in a race.  We had strategically gathered directly in line at the entrance and as a group, we navigated the hole shot like an ant colony through the eye of a needle. Masters veterans and party-weary pros dropped early, the brisk pace too much for them.

I was caught in the heat of the moment and by staggering a run stride between two walking strides I had found the perfect gate to avoid being trampled by the stampede while evading any penalty from the authorities. As I maintained pace and we broke the first barrier, the open plaza presented a whole new challenge.

Augusta Members were smiling and offering, “Good morning, welcome to The Masters” along with a handshake; this would only slow me down. Five of us were able to navigate this trap while others stopped to chat, only 80 yards of open space separated the lead pack from official entrance badges. One poor soul was drawn away from the finish line by the concessions shop, unable to resist the urge to spend money on high-end polos that he most likely has too many of.

Now close enough to taste a pimento cheese sandwich, an unforeseen pitfall. A small sign meant to direct ticked patrons to the left and credentialed PGA and LPGA professionals to the right, was barely visible.

Only two of us noticed it, the rest charging in glorious ignorance to an untimely fate at the general ticketing area. The morning now culminated in a duel, two racing to immortality — or something like that.

Honestly, I had been in front since about the halfway point of the race, my New Balance 574s performing flawlessly in this speed walking contest. I could tell my opponent was closing in and his stride was becoming more rapid, the heavy footsteps seemingly on my back.

From behind me I heard, “You want that first ticket, don’t you bro?!” and this unwitting taunt transcended the moment.

What did this first ticket look like? Did it come with a membership? A chance to play perhaps? Surely a tour of the clubhouse!

Whatever trappings befall the winner of the race, I wanted them.  At no time did the glory of being first weigh on my actions, they had been purely instinctual. People are moving fast, you do not want to be left behind so you move faster.

I now had a purpose, a reason to finish the last twenty yards as I was losing momentum. The challenger sensed my surge of strength and resigned himself to first loser, and once the barricades dictated a single-file line I slowed my pace to a victory walk.

Finally able to take in my surroundings, I crossed the finish line and stepped up to ticket window. Within the moments it took to process my information and secure a Masters badge the morning rush had taken form. I took one last look back before entering the grounds as an official patron and unsuspected wave of satisfaction swept over me. As time has passed, I realize one could not have asked for a better start to their Masters experience. A converted believer, I now advocate for all that can attend indeed do so, and have been back numerous times. All that can be experienced once walking the hallowed grounds of Augusta National Golf Club should not be spoiled, but I will say the legends are all true.

The Masters is a sporting event that blends striking beauty and fierce competition with pervasive humility — an event worth running for.

Aaron Ungvarsky is a PGA Professional and a Gary Gilchrist-certified instructor who gives golfers like you daily lessons on Swing-U.