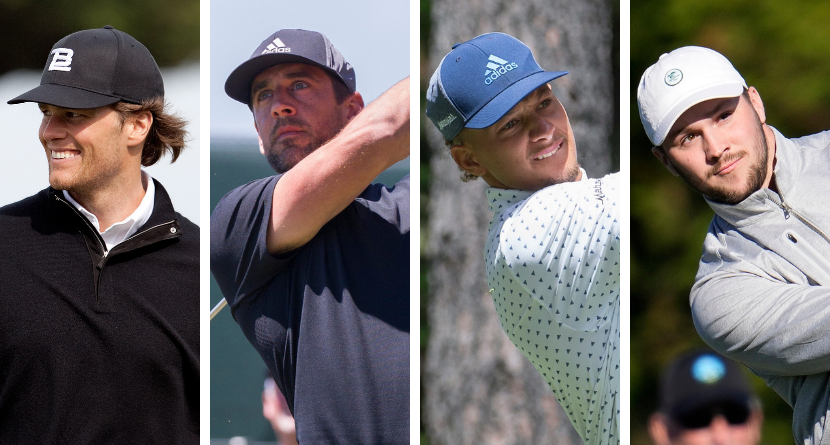 Tiger Woods and Phil Mickelson are two of the most accomplished golfers ever and proved more than capable of mentoring amateur partners in prime time. But how many touchdown passes have they thrown?

Indeed, the next iteration of Capital One’s The Match has no use for legendary PGA Tour pros and will instead put the spotlight squarely on an All-Pro quarterback lineup.

The NFC team of Tom Brady (Tampa Bay Buccaneers) and Aaron Rodgers (Green Bay Packers) will square off against a pair of budding AFC superstars in Patrick Mahomes (Kansas City Chiefs) and Josh Allen (Buffalo Bills) in a 12-hole match at Wynn Las Vegas on June 1.

We tried to make this a tag team cage match but the lawyers said our contracts wouldn’t allow it…#CapitalOnesTheMatch is back, June 1st. Let’s kick their ass @AaronRodgers12 | @JoshAllenQB @PatrickMahomes pic.twitter.com/3ByQqBkIJR

Host network TNT has yet to announce any of the particulars beyond the setting and the format, though you can expect the usual amount of side action and good-natured trash talk from a quartet of players with a rich shared history.

Brady, the group’s elder statesman, was briefly retired before returning to the franchise he helped win a Super Bowl title in 2020; Rodgers returned to the Packers on a monster contract extension despite all the reported discord that seemed to portend a change of scenery; and Mahomes and Allen were on opposite sides of a classic playoff duel in January.

For all his achievements on the gridiron, Brady is looking for his first win in The Match. He previously lost to Woods and Peyton Manning as Phil Mickelson’s partner, and he and Lefty also fell to Rodgers and Bryson DeChambeau in 2021.