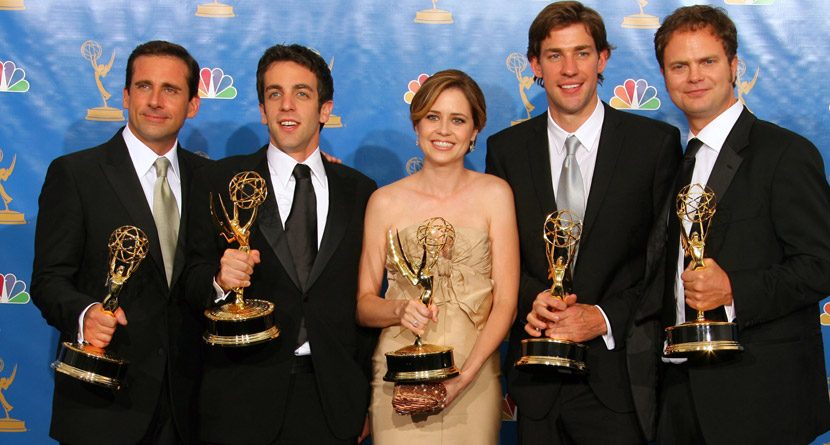 Eight years ago we were introduced to a world many of us have already been familiar with—a land of bald fluorescent lighting, gray walls and cubicles. A company in the middle of nowhere, Pennsylvania where everyone is a little too pale, a little too overweight, and a little too overworked.

We didn’t fall in love instantly—it took time. The Office was already a hit in the UK, but there was something about this Middle America, middle managing, button-down-shirt-from-Kohl’s wearing, passive aggressive cast of characters that once we saw it, we could all relate to. It was uncomfortable. There was no laugh track to let you know when the punchline was coming, and the humor wasn’t overt. Not your typical sitcom. But the style of comedy was smart and intuitive beyond belief. The manila folders, the plastic houseplants, the forced Casual Fridays—it was us. Because if you haven’t been there, you know someone who has. And they tell you about it every day.

On Thursday The Office says goodbye for the last time. So what can we expect? The cast reunites six months from now for Dwight and Angela’s wedding, and undoubtedly there will be memories and moments that will make the audience cry because it’s all happening for the last time. There will be interviews with producers and cast members—everything you’d expect from a series finale.  From reading the reviews, it appears unlikely that Steve Carell’s character Michael Scott will be returning. His goodbye was final on Season 7—but you never know, we might all be surprised! Personally, I’m crossing my fingers; because as someone who began watching the show because of Steve Carell, I think it’s crazy for producers to not bring him back for the series finale. It ties a bow on a series that got many of us hooked. Don’t be Seinfeld—don’t leave us hanging!

The office Series Finale airs Thursday, May 16 at 8 p.m. EST.