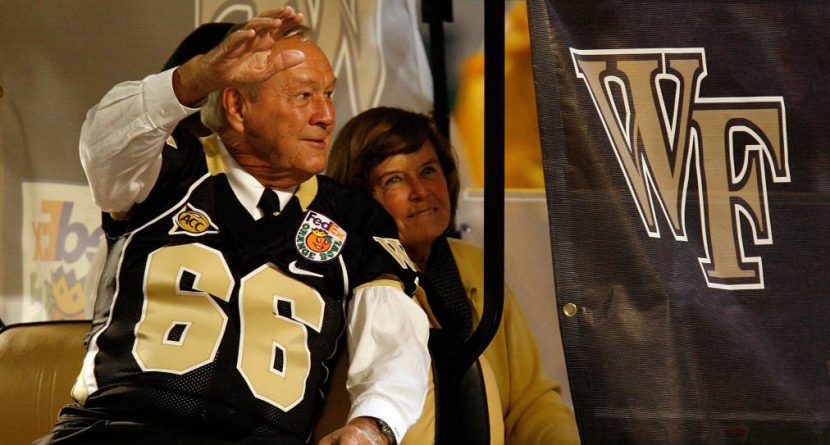 Bragging Rights: Consistently one of the best teams in the SEC

The Bulldogs’ campus in Athens, Georgia has been a breeding ground for incredible golfers and good ol’ boys for decades. Notable alums include Bubba Watson (a denim overalls enthusiast and owner of the General Lee) and ’07 grad Brian Harman (who told the PGA Tour Media Guide his favorite gadget is “firearms”). But in between the alligator-wrestling matches and banjo songs, the Georgia team has some serious game: they’ve won over 25 SEC championships and produced 22 All-Americans.

When you’ve played golf at UCLA, it stays in your blood. US Open champion Corey Pavin was called “GLB” or “Gritty Little Bruin” throughout his career (narrowly beating out the media’s other named for him, “Greasy Little Mustache”). But all facial hair aside, UCLA has been a force to be reckoned with both in the Pac-10 and nationally. They’ve brought two men’s national titles and three women’s titles back to their sunny campus, along with plenty of conference championships for both teams. Give me a record like that and you can call me anything you want. Wake Forest hasn’t been dominant in the ACC, but when it comes to the national level, the Demon Deacons bring it. The men’s team has won three NCAA Championships, including an absurd 33-stroke victory in 1975 behind the strong play of Curtis Strange and Jay Haas. Wake also produced 2012 U.S. Open champ Webb Simpson and 2011 FedEx Cup winner Bill Haas. But the greatest alum of all? Everyone’s favorite iced tea salesman and 7-time major champion, Arnold Palmer himself.

The Longhorns have been hooking their opponents (but not their tee shots) since they won their first national title in 1971. The scorching-hot city of Austin has become a hotbed for talented golfers, producing four major champions and the current leading amateur in the nation, Jordan Spieth. And with their new place atop the college golf world, everyone’s learning that even in this gentleman’s game, you don’t mess with Texas.

In a conference that’s always filled with talented teams, Arizona State has been devilishly good. They’ve taken home 10 men’s conference titles and eight women’s conferences titles in the last 25 years, more than any other team in the Pac-10. At the same time, they’ve benefited from the Mickelson connection: Phil remains a key donor and the school’s most famous athletic alum, while his brother Tim is the current men’s head coach.

As if David Duval didn’t have enough anxiety already, he’s got to share his college record book with fellow Yellow Jacket Bobby Jones. You know, the guy who founded Augusta National and is still considered one of the greatest players ever. Since Jones’s heyday as a frat boy in the early 1920s, Georgia Tech has racked up five individual NCAA national titles and 10 ACC conference titles thanks to stars like Matt Kuchar and Stewart Cink.

Bragging Rights: Still manage to win a lot despite living in Las Vegas

UNLV makes the list not just for the achievements of its teams, but for the self-control of its players. They live in Las Vegas-a city where you can walk down the street drinking beer while placing a bet and watching a volcano erupt, all at the same time-and they still manage to show up to the golf course. And these guys don’t just show up, they win. Their trophy case (which is hopefully bordered in neon lights) holds an NCAA championship trophy, two national coach of the year awards and honors for its 24 total All-Americans. I would gamble on UNLV anytime.

Big Shot Alumni: Vaughn Taylor, no one else you’ve ever heard of

Better known as “the other ASU” or “that school you drive past to get to The Masters,” scrappy Augusta State pulled off two Cinderella stories when they grabbed the ’10 and ’11 men’s national titles. Hailing from a college small enough to play Division II in all sports except golf, the unheralded Augusta State players defeated powerhouses like Oklahoma State and Georgia Tech to grab their first title in ’10, then did it again the next year. Amen Corner may be miles from the campus, but you can bet these players thanked their lucky stars after those championship runs.

Bragging Rights: More NCAA titles than any college in the last 25 years

If you’re sick of Rickie Fowler’s fluorescent orange wardrobe, take it up with the athletic director at Oklahoma State. The Stillwater, Oklahoma school with the cartoon cowboy mascot gave Rickie his love of that color, a shade he’s worn along with fellow golf alums like Hunter Mahan. But the Cowboys aren’t just a bunch of pretty outfits: they’ve won 10 national men’s titles and numerous women’s titles in the Big 12 championships.

Bragging Rights: Absurdly dominant in the 1950s and 1960s

When Fred Couples chose Michael Jordan as his vice-captain for the 2009 Presidents Cup, most people thought it was because Jordan could outfit the team with a lot of free Hanes underwear. But it might have been because Jordan’s Chicago Bulls teams reminded Couples of his Houston Cougars. From 1956 to 1960, Houston pulled off a five-peat of national men’s championships, then added a four-peat in the mid 1960s. All in all, the Cougars have won 16 national titles. Houston, we have a problem: we ran out of room for all your awards.