Thirsty For a Pint? Try These Pubs Near The Ryder Cup 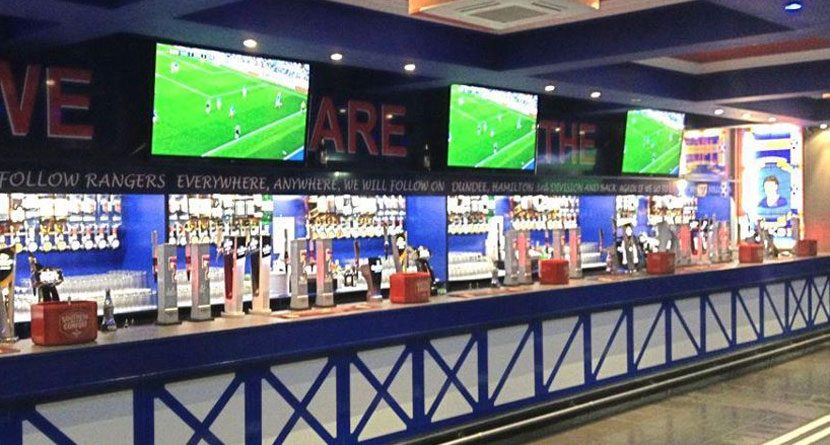 Gleneagles is in the middle of nowhere. And that means, if you fancy a beer during play you really are stuck with The Striding Man in the spectator village – once bitten, twice shy, as far as I am concerned. I don’t like my beer flat and I really don’t like it served in a plastic cup.
However, I am told that there are some rather fine Scottish pubs not too far from here. Most spectators are being bused in from places such as Glasgow (where there are lots of good pubs) and Edinburgh, the nation’s capital city and home to some fabulous hostelries. With that, here are three options for patrons looking to quench their thirsts this Ryder Cup weekend could try:

Gleneagles Hotel
Gleneagles Hotel is one of the finest in Scotland. The only problem with this choice, though, is the fact that both Ryder Cup teams and their partners are staying there. Plus many more of the game’s top players and high-profile people from both sides have the entire place booked until Monday. While the chances are slim that you could get in, the fare is quality and beers and lagers top notch. There is a host of offerings, including The Dormy Clubhouse (seen pictured, above). Just be sure to bring your wallet.

The Louden Tavern
If you are in Glasgow, you should check out a pub called The Louden Tavern. It is what is known as a loyalist pub. And here’s a handy hint: if you should decide to visit it while you are in Glasgow, do not, under any circumstances, enter the building while wearing green . The Louden Tavern,  you see, is a public house frequented by supporters of Glasgow Rangers Football Club. Walk in wearing red, white and blue and you will probably be greeted like an old friend. Walk in clad in green and white and you will be greeted like a dead friend. Green and white are the colours of Glasgow Celtic, their bitter city rivals.
They take their football (soccer) rivalries very seriously in Glasgow. And The Louden Tavern is a good pub with good, cheap beer, distinctive décor and limited conversation.

The Golf Inn at Auchterarder
The Golf Inn at Auchterarder (that’s pronounced Okterarder) is just a couple of miles from the village of Gleneagles. The Golf Inn advertises its attractions as “beers, dartboard, dart tournaments.” So don’t go in expecting any gourmet fare. A good, cozy tavern is what you will find filled with locals who turn around, stare and stop talking whenever a stranger enters.
The truth is that because Gleneagles is in Scotland, you will not find a poor pint of beer. Bad beer is frowned upon in Scotland. Another thing they don’t like is a big frothy head on their beer. When they pay for a pint of beer, they expect to receive a pint of beer – and froth does not count as any part of a pint of beer.
Related Link: Complete Ryder Cup Coverage
Other Hot Links:
– Did We Just Witness Greatest Ryder Cup Match Ever?
– 2014 Ryder Cup: Day 1 Studs & Duds
– These Guys Are Good: Just 1 European Has Losing Ryder Cup Record
– Keegan Bradley Talks Ryder Cup With Ahmad Rashad
– A Brief But Glorious History Of Rickie Fowler Photobombs
– 5 Players Team Europe Needs To Play Well At Ryder Cup
– 5 Players Team USA Needs To Play Well At Ryder Cup
– Phil On Fire: Confirms Keegan Pairing, Takes Shot At Team Europe
– Comeback King: Phil Mickelson Retorts ‘Suck On That’
– Keegan Bradley Recalls 1999 Ryder Cup
– Phil Mickelson Snags Wounded Warrior’s Phone, Takes Super Selfie
– Notebook: Americans Finding Plenty Of Incentive To Win
– Team USA Ryder Cup Posters Will Get You Pumped
– Rory McIlroy on Keegan Bradley & Ian Poulter: ‘They’re Both Nuts’
– ‘Screw You’: Ian Poulter Trash Talks Michael Jordan… In His Head
– One American’s Tribute to Ryder Cup Legend/Nightmare Ian Poulter