This Woman Can Outdrive You With One Arm 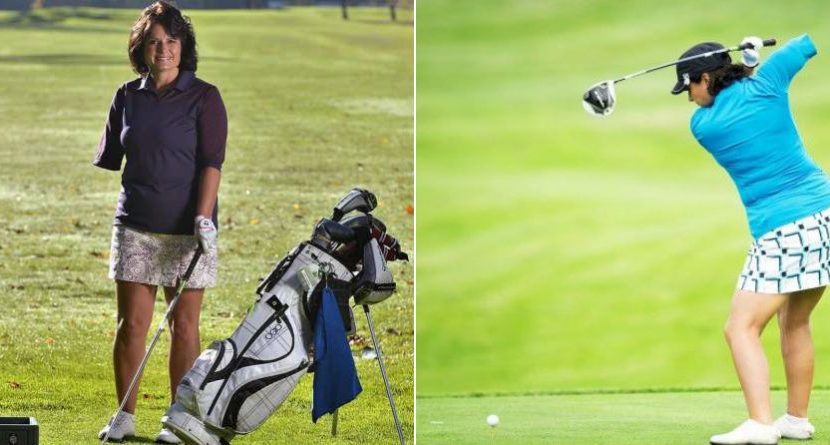 Unless you’re a woman making your living on the LPGA Tour, a 224-yard drive is really good. It might not win you any long-drive competitions, but it will give you some good-looking approach shots.

What will win a long-drive contest? Something like 224 yards with one arm. That’s what 43-year-old Kellie Valentine accomplished at the 2014 ParaLong Drive Worlds in Mesquite, Nev., giving her the victory in her first ever long-drive event.

It’s not a title that a young Valentine ever envisioned competing for, as she excelled in sports like softball, basketball and volleyball with all her normal limbs. In college, her father gave her a set of golf clubs, trying to prepare her for the corporate world she would soon enter. But all they did was collect dust. Golf, Valentine said, was “slow and boring.”

That all changed when she lost her right arm in a car accident in 1993. She had always been athletic, but suddenly found her options limited. So she began swinging those clubs – after a little smack talk from her father, who liked to remind his daughter of a sport in which he could beat her.

“Finally, I said, ‘Dad, give me the clubs, and I’ll beat you within two years.’ I finally did,” Valentine told her hometown newspaper, the Erie Times-News, in Pennsylvania. “That’s what gave me a goal.”

Golf has since turned into a lifestyle. Valentine works as a mental health therapist, but now, more than 20 years after her accident, she makes time to compete in golf tournaments all over the world. Like the event in Nevada or the National Amputee Golf Open Championship last year in Lincoln, Neb.:

And she’s also a member of the National Amputee Golf Association, which has taken her to events in Italy, Japan and Australia. All of which goes to show that the life you live in your 20s isn’t the life you will always live.

“Losing my arm has opened more doors than one would think,” Valentine said. “I’ve had the chance to visit and play golf in other countries that never would have happened before (the accident).”