Three Golfers Ace the Same Hole on the Same Day 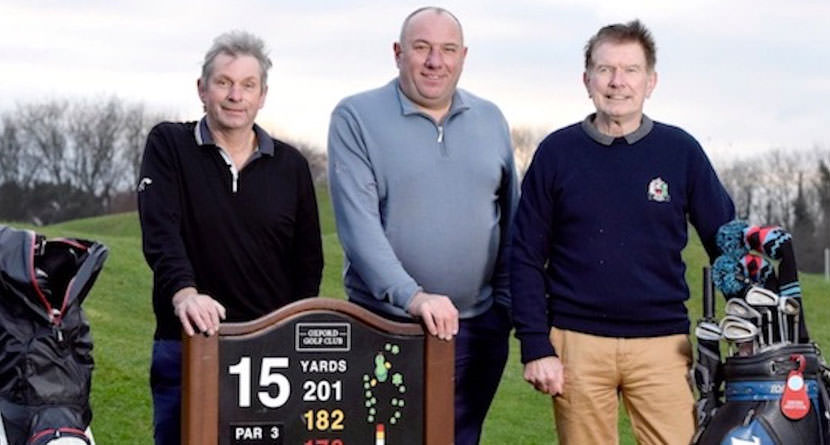 Golf is a game of playing the odds, but sometimes there are occurences that simply fly in the face of what makes sense. Three English golfers recently defied odds that reach into the tens — if not hundreds — of millions.

Oxford Golf Club in Oxfordshire, England had three members all hit holes-in-one on the same day and on the same hole. To add to the unliklihood, two of the aces came on consecutive swings on the 201-yard 15th hole.

GolfPunkHQ.com had more details on the incredible feat.

Two of the holes-in-one at Oxford Golf Club’s 15th hole were consecutive strokes. The National Hole in One Registry will give you odds of more than 17 million to one against that happening, in the first instance.

When the lucky pair returned to the clubhouse, they found that they were not the only players to be celebrating. The barman told them that another golfer had bought a bottle of whisky because he too had hit an ace on the same hole earlier in the day.

Michael Bidmead, 72, and Milos Bilic, 51, were competing in a ‘three-ball’ match when they both hit holes in one on the 201-yard par three hole. Milos hit a six iron towards the pin, but because the green was in a dip, he could not see how his ball ended up.

Michael then hit a six iron straight at the flag and they walked up the fairway once the third player in their group had played his shot. When they got to the green, they were surprised when they only saw one ball on the green. But then they saw both their balls side by side in the hole!

“I was buzzing,” said Milos, of Marston, who plays off 10. “It’s a bit of a blur, but we punched the air with delight, hugged and shook each others’ hands. Some guys on the next tee, who saw it, came over and congratulated us.

“I’ve been playing golf 18 years and it was my first hole-in-one. It’ll probably be another 18 years before I hit lucky again! Someone told me the odds of two people getting a hole in one in a row are 17 million to one. It was the best shot I’ve ever played, but it’s luck really – I should have got a lottery ticket that week.”

Michael, a seven-handicapper, added, “We both hit the ball well and knew we were close – but we didn’t expect to see both our balls in the hole.”

Back at the clubhouse, and Alan Green had been getting in the drinks, after having his own ace at the 15th earlier in the day.

“The bar man couldn’t believe it when we walked in and told him,” said Michael. “It’s tradition at Oxford Golf Club to buy a bottle of spirits if you get a hole-in-one and Alan had already got a bottle of whisky in by the time we arrived.”

It was Alan’s first hole-in-one after 38 years of playing golf.

“I was delighted, a few of my friends have got holes in one and it is something you dream about, so it felt fantastic. I couldn’t believe it when some of the boys told me Michael and Milos had also aced the 15th!”