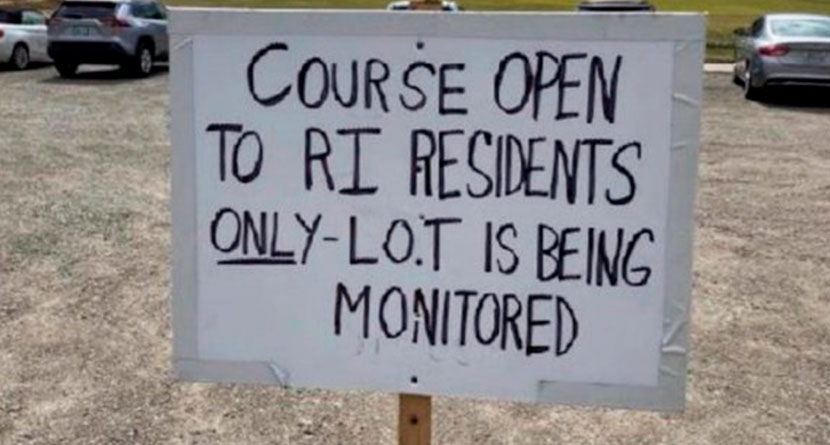 Three golfers from Massachusetts were arrested in Rhode Island last week after for violating the Governor Gina Raimondo’s executive order that out-of-state visitors must self-quarantine for 14 days if they enter the state for non-work-related purposes, according to The Providence Journal.

The three men — Gregory S. Corbett, 51, of Attleboro; Tyler E. Pietrzyk, 22, of Taunton; and Nye M. Cameron, 22, of Taunton — made the short drive into Rhode Island on April 1 and made an effort to conceal their out-of-state identities in order to get in a round of golf.

With golf prohibited in Massachusetts by order of its governor, and instead of attempting to play on like some of their fellow Bay Staters, the men drove to a McDonald’s off of I-95, loaded their clubs into a car with Rhode Island plates and headed to nearby Meadow Brook Golf Course.

Richmond Police Chief Elwood Johnson said that authorities received a call from the McDonald’s reporting that the men had taken golf clubs from a car with a Massachusetts license plate and loaded them into a Rhode Island-plated vehicle.

The course had displayed signs warning out-of-state golfers from playing. A few hours later, the car — driven by a Narragansett, R.I. resident — returned and dropped the men off at the fast-food restaurant where police were waiting.

The men were released at the scene with a summons to appear in court on May 14. They each face a fine of up to $500 and up to 90 days in jail.

“It’s not the most heinous offense, but the reality is that we’re living in a whole different world this month, and it’s important we all follow the rules to keep one another safe,” Johnson said.

If you’re wondering what the status of golf in your state is during the coronavirus pandemic, the Golf Course Superintendents Association of America is keeping a daily state-by-state list of golf course openings and closures based upon executive order. You can find out what the latest rules are in your state by clicking here.