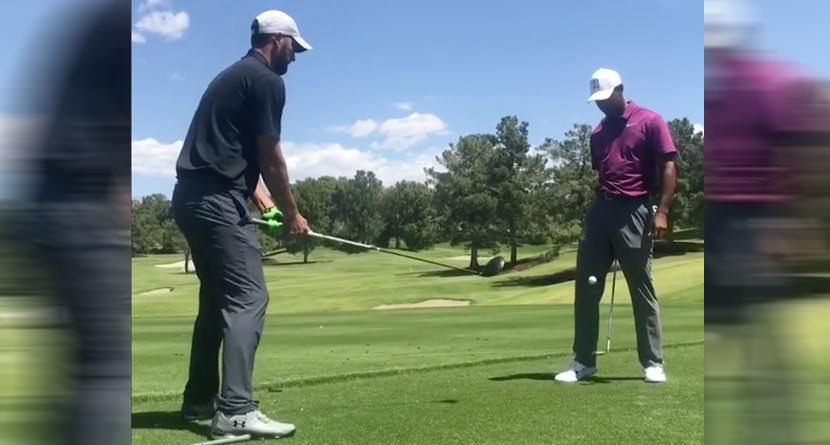 Ironically enough, the impact that Tiger Woods had on the game of golf also leaked into the growing world of golf trick shots. During last week’s Tiger Jam fundraising events that benefitted Woods’ TGR Foundation, one of the most popular and talented golf trick shot artists in the world and SwingxSwing ambassador, Josh Kelley, teamed up with Woods to produce one of Woods’ first-recorded trick shots.

“Dreams really do come true!” Kelley wrote on his Instagram page that boasts over 235,000 followers. “When I was 12 years old, I was watching TV when (Tiger Woods) juggling commercial played. I remember grabbing my ball and wedge to run outside and try it myself. Not only has he always been my inspiration to play golf but also one of the biggest reason why I do what I do today. Thank you for the amazing weekend at #tigerjam”

The commercial Kelley referenced in his caption is a cultural phenomenon. On the set to produce a commercial for Nike, Woods was off to the side during lunch juggling a golf ball on his club to kill time. While the original premise of the spot called for hack golfers to improve by being in the presence of Woods, the commercial’s director saw Woods juggling and grabbed a handheld shoulder camera and told Woods to juggle while being filmed.

After some chiding from the director, Woods did his famous take, bouncing the ball between his legs, behind his back and smacked it out of midair, not unlike what he pulled off with Kelley some 18 years later at Tiger Jam.