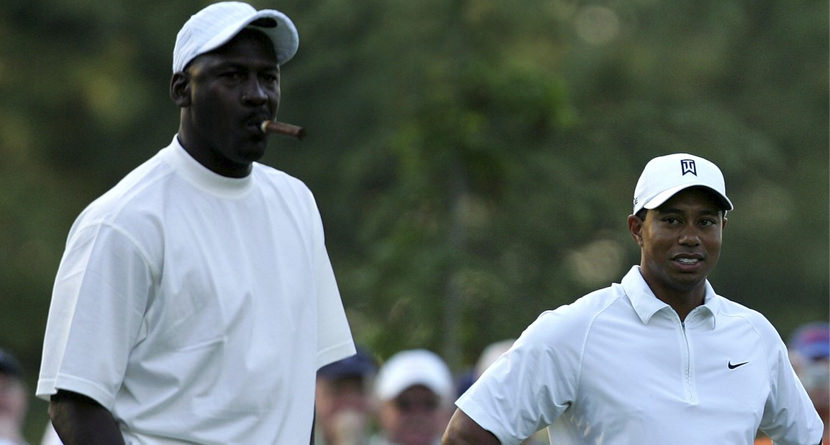 The unauthorized biography of Tiger Woods, released on Tuesday, has hit a nerve with many of the subjects in the book and has sparked a strong reaction from multiple camps.

The book “Tiger Woods”, co-written by Jeff Benedict and Armen Keteyian, goes into great detail about the rise and fall of Woods following the 2009 scandal and treatment for sex addiction. There are many juicy tidbits in the book that have elicited a strong reaction from multiple parties, including warnings for Woods to stay away from Michael Jordan and Greg Norman.

Woods did not participate in interviews for the book but did allow the writers to interview his doctor. The book also explores Woods’ relationship with Anthony Galea, the Canadian doctor accused of providing performance-enhancing drugs to athletes. On Wednesday, Wood’s manager responded to the publication.


“This book is just a re-hash from older books and articles and it’s hard to tell if there’s anything original at all,” Woods’ manager Mark Steinberg said in a statement. “The authors claim ‘we seldom quoted anonymous sources’ yet they relied on them at least 65 times.”

Steinberg said the book contained egregious errors but did not indicate which, and the authors went on ESPN’s Outside the Lines to discuss the book.

There is a multitude of other tidbits and anecdotes about Woods relationship with various celebrities. One story that has gained traction is Woods’ relationship with former President of the United States Bill Clinton. The book recounts a round of golf where Woods was unengaged with the president during the outing.

Clinton’s team shot back at the characterization of the relationship between the former president and Woods. Former Clinton counselor Doug Band disputed the notion to Golf Digest that Woods and Clinton were at odds. Band was on the course with Woods and Clinton that day and wrote in Golf Digest about the round. Band also provided photos of the round with Clinton and Woods interacting.

“The whole notion that Tiger was disrespectful toward the President is completely false,” Band wrote. “The way the authors describe the round of golf (and the events surrounding it) is not only inaccurate, it’s mean-spirited. It was a casual, intimate round with a group of people who relished the chance to hear each other’s off-the-record stories and enjoy the day together away from the rest of the world. As best I could ascertain, they came to the game with respect for each other and left it with more.”

The authors, after their interview on OTL, released a statement to Golf.com responding to the allegations of factual errors.

“Between January 2016 and February 2018, we made repeated attempts to interview Tiger himself through his representatives, Glenn Greenspan and Mark Steinberg. As we write in our book, they imposed conditions for Tiger’s cooperation that no serious journalist would accept.

“As for our sourcing and research, as responsible biographers we are very open in our book about the use of Tiger’s own extensive written and public statements as a crucial source of insights, facts, and reflections.

We credit these and other previously written books and articles about Tiger Woods for providing valuable reference and verification for our narrative.

“If we have made any inadvertent typographical or factual errors, we will correct them in future printings of the book. “But let us be clear: We stand by the accuracy of our reporting and are proud to have produced a critically acclaimed book that answers a question many have asked for many years: Who is Tiger Woods?”

The furor over the book looks like it won’t be stopping anytime soon, especially with a resurgent Woods as one of the favorites at next week’s Masters Tournament. Variety reported that there is already a docu-series in the works by director Alex Gibney based on the just-released book.