Tiger Woods, Donald Trump Tee It Up In Florida 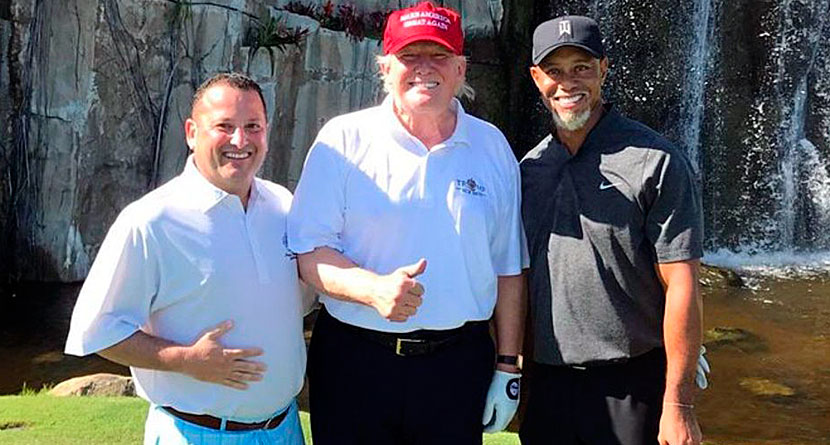 You’d be hard-pressed to find two more polarizing people in their respective fields than Tiger Woods and Donald Trump. Naturally, the two lightening rods teed it up together on Friday at Trump International in West Palm Beach, Fla. The outing, which was first reported by No Laying Up’s Mattie-Lou Chandler on Wednesday, came about as an invitation from Tiger.

Trump is playing with Woods in a morning round at Trump International in West Palm Beach, Fla., located within driving distance of Woods’ Jupiter Island mansion.

This is Trump’s first round since Election Day, Nov. 8. Trump’s staff maintains the 70-year-old has almost completely avoided golf since throwing his name in the fray for the Republican presidential nomination in June 2015.

Woods won the 2013 WGC-Cadillac Championship on Trump’s Doral resort, with Trump awarding the trophy to the former world No. 1 and naming a villa at the resort after Woods. Woods, who turns 41 on Dec. 30, has also designed Trump World Golf Club, which Trump’s management company will run in Dubai in the United Arab Emirates when it opens in 2018. It will be the second Trump-managed course in Dubai, with Trump International Golf Club, Dubai, now having finished construction.

How many strokes do you think Kai is going to give @tigerwoods and @realDonaldTrump ??? #golf pic.twitter.com/QyW9M6g2sb

Beings that politics were involved, not everyone was happy about the power pairing, including noted celebrity golfer George Lopez.