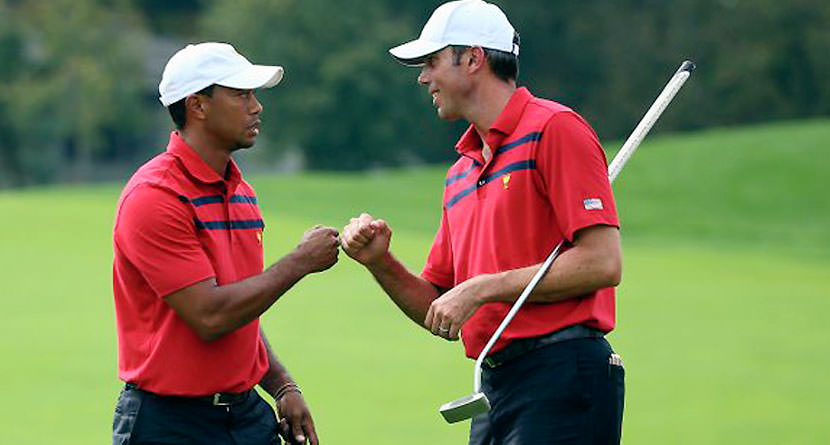 The name “Tiger Woods” is never far from golf fans’ lips even two years after he last made a cut on Tour. That fact is partially because you can’t watch a PGA Tour event on television without some kind of milestone a current player is approaching already having been accomplished by Woods as well as the fact that he is one of the most pop sportsmen on the planet even as he recovers from a fourth back surgery.

While updates from Woods and his camp are few and far between, Tiger took to his personal website to vent a little bit about what’s going on in his life currently, how he is feeling, what he’s been up to and give other thoughts on some news of the day.

Looking forward to the @PresidentsCup in NYC next week. https://t.co/V0mZQ2KcOv

After opening with his condolences to those affected by the hurricanes that have ravaged portions of the Southern United States and Caribbean Islands as well as the earthquakes in Mexico, Woods jumped right into how his recovery from back surgery is coming along.

As I wrote earlier this summer, I had a few matters to work on with my doctors and I did that. I’m feeling good, strong and doing really well. About my most recent surgery, it’s nice not to live in pain anymore. I’m sleeping better because I don’t have any nerve pain going down my leg. It makes a world of difference.

I’m starting to hit the ball a little further – 60-yard shots. I have not taken a full swing since my back fusion surgery last April, but continue to chip and putt every day.

The latter is paying off. Justin Thomas and Rickie Fowler have been dropping by my house for putting contests. Justin also comes over to practice his chipping. It was fun to celebrate his PGA Championship win with him and Rickie, and we had a blast.

I have my six-month back X-rays coming up. Once my surgeon takes a look, he’ll give me the parameters of what I can do moving forward.

I’m working out six days a week, alternating between the treadmill, bike riding, swimming and lifting twice a day. My muscle tone is coming back, but I’m not in golf shape yet. That’s going to take time.

Next, Tiger went into a few of the challenges that arise as it pertains to assistant captaining a Presidents Cup as opposed to a Ryder Cup.

I am fired up for the Presidents Cup next week. It will be great to be around the guys and try to help our team any way I can to win. I had a blast doing it last year at the Ryder Cup and we have another great captain in Steve Stricker. We tried to keep the band together with Jim Furyk, Davis Love III and myself, and added Fred Couples, to maintain consistency and unity.

We have a young team and quite a few first-timers. But they’re solid guys and have played well all year. My biggest responsibility is to do whatever the captain asks me to do.

There is a big difference between assisting with the Presidents Cup versus the Ryder Cup. I think it may be more difficult because there are more pairings going out. You have to find more teams and there are different rules. For instance, if you played Thursday and Friday, you could sit out Saturday. Before, you had to play every day. Also, I’ve never been through selecting pairings and we have a time limit. I’m trying to understand that.

As for a team theme, it’s too early because a lot of these guys are playing for $10 million in the FedExCup. You don’t want to bombard them with information. They’re a little bit tired and beat up. I know that Stricks has done a couple dinners with the guys and some played a practice round at Liberty National. We’re just trying to keep it to a minimum but also keep them informed.

My biggest takeaway from the Ryder Cup last year was that as a player, it’s very simple: all you have to do is get ready to play fourball and foursomes, and know who you might play with. That’s it. As an assistant captain, you’re in charge of the wives, girlfriends, families, caddies and individuals that support the golfers. It’s a lot more organizational work than I was used to as a player.