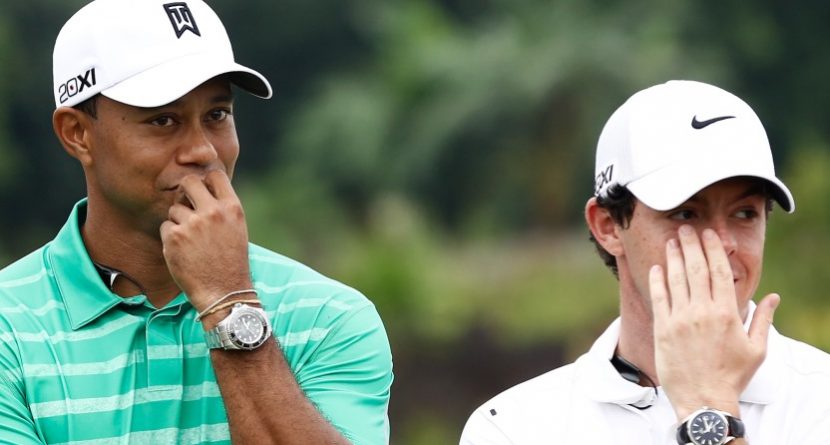 That was Tiger Woods’ response Wednesday when he was notified that he had actually sent out five tweets (including re-tweets) on Monday and Tuesday. That might be a record for him.

A couple of those tweets had to do with Jason Dufner making a hilarious request about the scheduling this week for Tiger Woods’ event, the Northwestern Mutual World Challenge. And two more tweets involved a contest for fans to design his golf shoes. The last one mentioned the El Cardonal golf course he’s designing – and included a link off to Instagram (yep, Tiger’s on Instagram too!).

Of course, Tiger’s prolific tweeting raised eyebrows, so it was brought up in his pre-tournament press conference.

“I’m still a little bit old school,” he said when asked about Twitter. “I’m kind of getting towards it, but still not quite grasping the whole concept yet.”

His girlfriend, Lindsey Vonn, grasps it, though. And she’s trying to get the old guy hip with the popular crowd.

“As far as her convincing me to tweet more, yes, she certainly has hinted that,” he said. “But I grew up in a different era, and it’s a little bit different for me. But I’ll get there eventually.”

Rory McIlroy can’t use the same excuse, because he is growing up in this era. As such, he’s more active on social media – and because of that, we know he attended the Beyonce concert earlier this week in L.A. with his girlfriend, Caroline Wozniacki.

Yet, while he’s game to let his followers know what he’s up to, he doesn’t pay much attention to what they say on Twitter.

“In terms of the outside public, what I feel like I’ve learned this year is they think that your good is better than what it is, and I think they think your bad is worse than what it is,” McIlroy said Wednesday. “When you do well, you get hyped up so much, and when you do badly they think it’s the worst thing ever. So there is no real balance in it. … So I don’t look at the comments that much, if I’m honest. I’ll look at my timeline and people that I follow. But in terms of what fans and public are saying, I try not to look into it too much.”