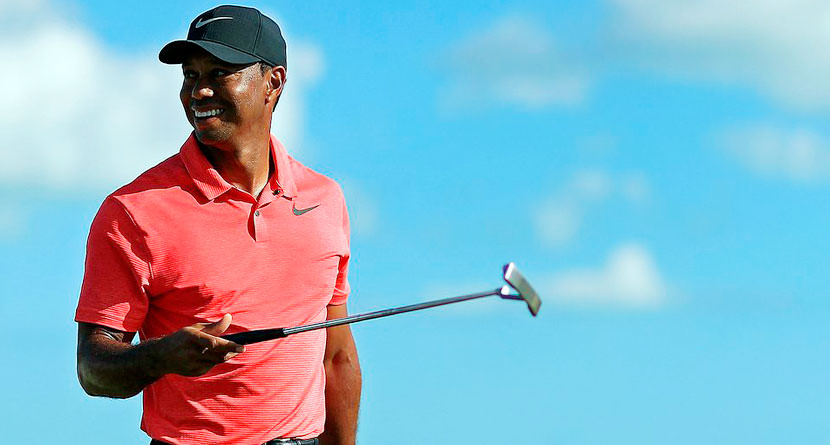 Tiger Woods released his annual year-in-review blog on Friday afternoon, touching on topics ranging from his competitive future, his business ventures, sponsors and some personal anecdotes.

The 1,700-word update wraps up what has been one of the most interesting years in Woods’ 42 years (he celebrates his birthday today, Dec. 30) on this planet. From a failed attempt at a comeback and subsequent fusion back surgery at the start of 2017, to an arrest on suspicion of DUI in the summer to an encouraging return to professional golf earlier this month, 2017 has run the gamut.

Here are some of the highlights from Tiger’s post, which you can read in its entirety on his website.

I was very encouraged by my performance at the Hero World Challenge, and hope it was the start of something big. I honestly wasn’t sure what to expect after being away from competitive golf for 10 months and came away excited about my health and my game.

Before I went to the Bahamas, I played practice rounds with Justin Thomas, Rickie Fowler, Rory McIlroy and Dustin Johnson at home. They were all trying to get me to go out to practice and play, and that was nice. They wanted to help me come back and wanted to see me play well. It was a lot of fun going out to Medalist Golf Club and playing for a few bucks and having a good time.

There wasn’t a lot of time to fully prepare for the tournament; about a month to be honest. My surgeon was fantastic in guiding me through the rehab process. It was slow and tedious, but paid off. It was a big step for me to go out there and play four pain-free competitive rounds. I practiced after two of the days, so that was nice as well.

The juices were flowing right away. It was just a matter of finding the rhythm of the round. One of the things we (Joe LaCava) did prior to the tournament was go down to the Bahamas and play four straight days to try and simulate a tournament. I felt good about it, and when we went back down and got into the tournament, I found my rhythm on the second hole.

The biggest surprise for me was finding out that I had the lead after 27 holes. I knew I was close after I eagled the ninth. It was nice to have played well enough to do that after being gone so long.

I took a week off after Hero to train and build up my body because as a tournament week goes on, we all degrade a little bit. That’s just the nature of playing competitive golf.

Now, I feel I’ve taken it to another level. I’ve started practicing again and was out with Justin the other day and had a good time. I’m continuing to progress and trying to get strong enough to where I can handle a workload again. I would love to play a full schedule in 2018. What that entails, including back-to-back events, I don’t know. I just have to continue to work on my body and game and see where I pan out. I wish I knew where I was going to play and when I was going to play – it’s a lot easier to prep for that – but we really don’t know. This is all unchartered territory.

My swing is definitely shorter and I can’t turn as far. My back is fused and that’s as far as it’s going to go. But I was surprised at how explosive I was. And on top of that, how well I putted. I had been rolling it well at home, but it’s totally different when you have adrenalin in your system. I’m more than a full-club longer than when I shut it down. I wasn’t hitting it very far and was struggling to hit it solid. That’s a bad combo.

I appreciate competitive golf now more than I ever have. During that 10-month period I was away from the game, I had a hard time walking and often needed assistance getting out of bed. To go from that and be able to play golf – I hadn’t played without pain for a long time – it was nice to just go out there and chill out, have fun with the guys and needle them. The next step was competition.

One way or another, I will be at Riviera Country Club in February for the Genesis Open. It’s such an historic site and the course will always have special meaning for me. That’s where it all started back in 1992 when I played in my first PGA Tour event at age 16. My foundation now runs the tournament and it will be great to return to my old stomping grounds. I greatly appreciate Genesis’s support of the event and the TWF.

Woods closed by once again thanking former swing coach Chris Como for his help over the past few years. The two officially split last week. He also acknowledged the decision to amend the rules for 2018 and Kobe Bryant for having his jersey retired before signing off with a grateful salute to friends, family and fans.

I continue to be surprised by the number of people who come up to me and say how ecstatic they are to see me playing golf again. I didn’t foresee that kind of response from players, members at Medalist, at my restaurant in Jupiter or just out and about. Frankly, it’s humbling. I think people are more appreciative about what I’ve been able to accomplish and I’m more appreciative of everyone, too. To all of my fans, best wishes for a healthy and happy New Year. Again, I can’t thank you enough for your continued support and am looking forward to a great 2018.