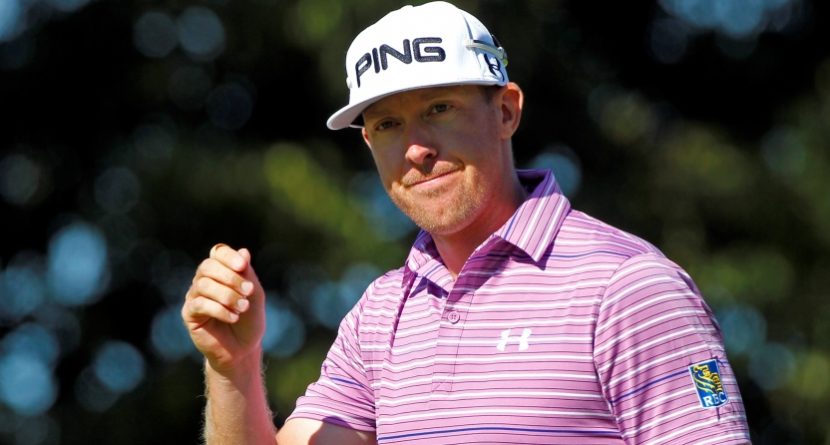 One of our favorite Golf Boys, Hunter Mahan, became a surprising topic of discussion Wednesday night during Game 4 of the ALCS between the Boston Red Sox and Detroit Tigers. It was the top of the eighth inning with Detroit up 7-2, so apparently the Fox announcers, Tim McCarver and Joe Buck, needed something to chat about.

On the screen popped this tweet that Mahan posted Tuesday morning:

If players are so upset at Puig celebrating a triple or clutch hits then get him out. I’m tired of hearing about baseball’s unwritten rules

In case you missed it, the L.A. Dodgers’ Yasiel Puig slugged a long drive during Monday’s Game 3 of the NLCS with the St. Louis Cardinals. The 22-year-old rookie thought it was gone, so he tossed aside his bat, admired the flight of his ball and raised his arms in celebration. Only it didn’t clear the fence, so he took off on a sprint and reached third standing up. Puig again raised his arms. Why not? It was a big hit that gave the Dodgers a 2-0 lead.

The Cardinals’ Carlos Beltran had this to say afterward: “As a player, I just think he doesn’t know (how to act). That’s what I think. He really doesn’t know. He must think that he’s still playing somewhere else.”

That Puig shouldn’t celebrate like that is one of the “unwritten rules” to which Mahan was referring. McCarver then felt like he needed to defend his game, so he collaborated with the Fox graphics staff to throw up this: He makes one good point – are golf shorts for the pros really that bad when the temperature is stifling? But from there, McCarver felt the need to diss golf. Why? We’re not sure. Talk when your opponent is hitting? Hit balls into the foursome ahead of you? Walk on your opponent’s putting line?

Come on, Tim. Defend baseball all you want, but don’t make ridiculous statements about another sport. No one’s hitting balls at guys on purpose in baseball. No one’s purposely trying to hinder the field on which baseball is played.

Mahan, meanwhile, would like to have a chat with McCarver:

@TimMcCarver @timmccarvershow would love the opportunity to defend myself. This is a perfect debatable issue if interested. #BringItOn

And it teaches us all a valuable lesson about Twitter – you’re putting your thoughts out there in the public domain, allowing anyone to interpret them however they wish.

This is why I love Twitter. You never know who you’re going to reach.