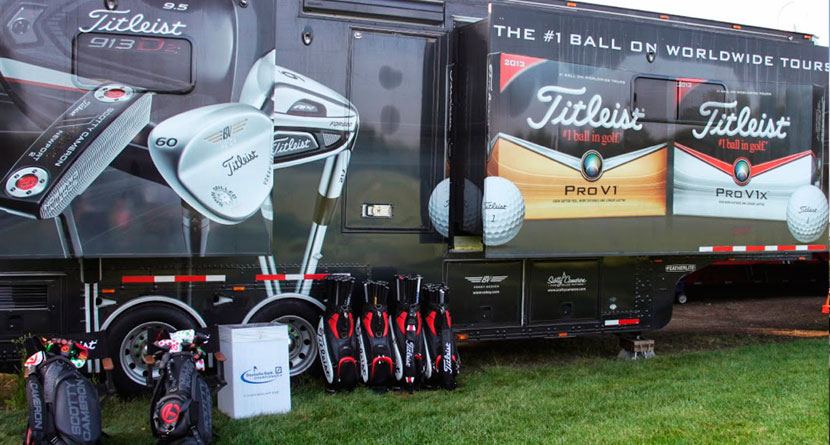 Parody accounts have become all the rage in recent years. Those on social media have created accounts — and made money (!) — by taking on parodies of others that range from fictitious movie characters like Shooter McGavin and Happy Gilmore to professional athletes who aren’t active on the site like Matt Kuchar or Colin Montgomerie.

The parody movement has spilled over from social media to merchandising, and Acushnet, Titleist’s parent company, is not taking kindly to one parody golf company trying to monetize by using a similar design to push a lewd spin off of the iconic Titleist script logo.

Deadspin.com had a breakdown of the suit leveraged against I Made Bogey, the parody account selling the merchandise.

I Made Bogey is an online golf apparel company that sells products with slogans you’d expect to see on the Wildwood boardwalk. There are a series of t-shirts inspired by Happy Gilmore. There are red “MAKE GOLF GREAT AGAIN” hats. But the bulk of the products on the site are parodies of golf brand Titleist. Only instead of that brand’s name, it reads: “Titties.”

That angered Titleist. As Bloomberg reports, the company has filed a lawsuit against I Made Bogey citing unfair competition, trademark infringement and dilution.

The “Titties”—and “Titlelost” gear, which doesn’t seem to be for sale anymore—hats are a clear knockoff of the Titleist logo. But Bloomberg’s Polly Mosendz and Kim Bhasin explain that the Titleist might have an uphill battle with its claim:

In the suit, Titleist claims both trademark infringement and dilution. For dilution to stick, it must show that I Made Bogey’s hats tarnish Titleist’s reputation or blurs its fame. For trademark infringement, however, Titleist must show that consumers would be confused by the two logos. “They would have to show that people would think Titleist is making hats” with the sexually explicit misspelling, said [Donna] Tobin, the attorney. And that would be pretty difficult, she said.

Experts aren’t convinced Acushnet has a case. “The lawsuit is probably doomed because nobody would think that Titleist made these products. It’s a parody, and most people would get the joke,” explained intellectual property attorney David Erikson, principal of Erikson Law Group in Los Angeles. “Trademark law doesn’t prevent all uses of a competitor’s name—it only forbids uses that are likely to confuse consumers about the source of goods. Because he’s not passing off his golf products as coming from Titleist, [I Made Bogey operator Benjamin] Russell would probably prevail.”