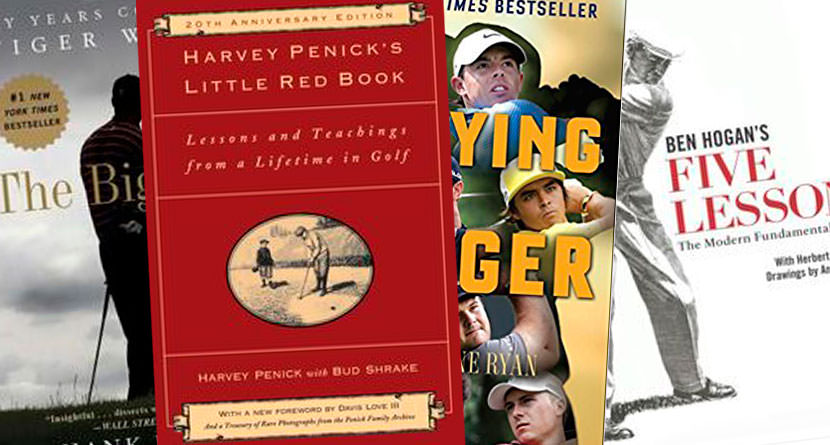 Golf has permeated our culture in a way few other sports have. It has found its way into our movies, TV shows, magazines and, of course, books. While the lure of picking up a hardcover book and reading it front to back is fading, that doesn’t diminish the quality of some great books about golf — aa the saying goes about sportswriting, the smaller the ball, the better the writing.

In honor of National Library Week and World Book Day, here are 10 great books you should read.

A Good Walk Spoiled: Days and Nights on the PGA Tour by John Feinstein Feinstein paints the world of golf in a way that it has never been captured before. Feinstein gets inside the minds of some of the game’s greatest players but also its struggling newcomers. Journey alongside some great moments in golf, like Davis Love III’s epic comeback victory in the Ryder Cup.

Feinstein expertly describes, “One week you’ve discovered the secret to the game; the next week you never want to play it again,” summarizing the every man’s relationship with golf. Check it out. It is no coincidence that Tiger won six majors during the six-year span the Haney was Tiger’s swing coach. He was at his side on and off the course, streamlining Tiger’s mechanics as well as discovering what made the athlete tick.

For all his criticism, he is only on a quest to understand. Tiger’s most dominant fear on the course was “the big miss,” a shot so horrible it ruins the entire round. Haney gives us a metaphoric spin. Check it out.

The Greatest Game Ever Played by Mark Frost This is the famous story of blue-collar kid Francis Ouimet, who grew up living across the street from The Country Club and would play the U.S. Open at the very course in 1913.

Against all odds, and with his 10-year-old caddie by his side, he takes home the title in an 18-hole playoff against the great Harry Vardon. One of the greatest stories in amateur golf. See more. The best players know that golf is a game of confidence, and most important, concentration–the ability to focus and block out distraction. The goal of achieving clear thought is also at the heart of Buddhist teachings. In his highly original and groundbreaking book, noted PGA coach and Buddhist instructor, Dr. Joseph Parent, draws on this natural connection and teaches golfers how to clear their minds, achieve ultimate focus, and play in the moment for each shot. Check it out. This book is considered topical for advanced golfers, so it can be a tad overwhelming. But golfers who understand the importance of the game of golf inside 100 yards are better off than most. Enhance your game a great deal and read up. Check it out.

My Life In & Out of the Rough: The Truth Behind all that Bull**** You Think You Know About Me by John Daly with Glen Waggoner The tumultuous life of John Daly has been a well-documented one over the years. ESPN’s recent 30 For 30 is an awesome detail of this beloved golfer’s career. Learn about the man before he hit the big screen with his awesome autobiography. He talks about his gambling, addiction, multiple divorces, and even some of the great golf he has played. See it here.

The Bogey Man: A Month on the PGA Tour by George Plimpton Fortunate enough to be writing in the less guarded era of golf, when access to the Tour was not as regulated, Plimpton gives a weekend golfer’s perspective from inside the ropes. He discusses not just the pros but strange caddies, smart-mouthed officials and cocktail-sipping fanatics. His writing style is truly unique. Check it out.

Harvey Penick’s Little Red Book: Lessons and Teachings from a Lifetime in Golf With golf instruction, it isn’t what you say that is going to get through to the student, but rather how you say it. No one said it better than Harvey Penick. He gave his life to the game and had a knack for making it sound so simple.

Whether it was a major winner or he was helping a first-time pupil get the ball in the air, his dedication was the same. He wrote down tips and tricks in a red spiral-bound notebook after every workday at Austin Country Club to make up what would eventually rank as one of the best-selling golf books of all time. Learn more.

Slaying The Tiger: A Year Inside the Ropes on the New PGA Tour by Shane Ryan One of the more recently published books on this list, Slaying the Tiger by Shane Ryan reads like a series of feature articles on each tournament from the 2014 PGA Tour season.

Many of the principle players detailed in Ryan’s book — Jordan Spieth, Bubba Watson, Patrick Reed, Dustin Johnson, Rickie Fowler — are still the biggest names in the game today. Get to know the players you watch every week on Tour a little better. Check it out. Ben Hogan had no access to modern technology, but still discovered aspects of the golf swing that are still valuable to this day. Hogan found his answers in the dirt through a finger-to-the-bone work ethic that we had never seen before. This book is a must-read for golfers of all skill levels. Check it out.