Top 5 Moments at the Greenbrier Classic 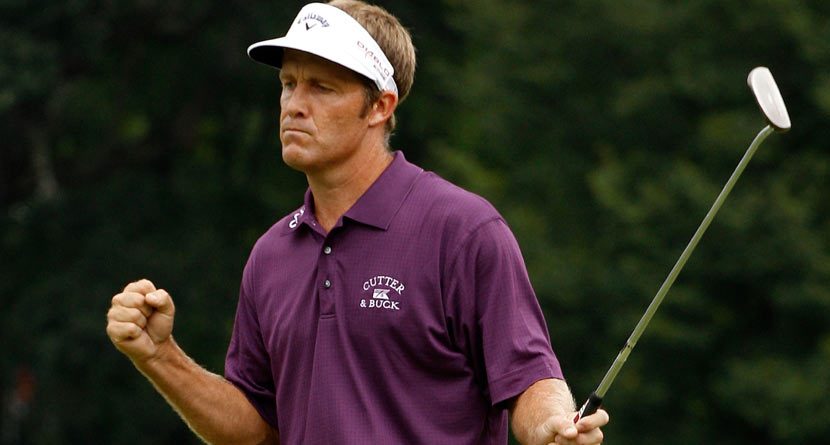 The Greenbrier Classic hasn’t been around that long, but during its brief existence, the tournament has given golf fans plenty to cheer about.

In four years, we’ve seen two playoffs, two first-time winners, a round of 59 and one emotional winner breakdown after realizing his dream had come true. Here’s a look at the top-5 moments from the Greenbrier Classic

Coming from four shots back on Sunday, Swedish star Jonas Blixt claimed his second career win at the Greenbrier Classic by two shots over a foursome of tour stars. After the win, Blixt was emotional realizing that with his victory he would move up 100 spots in the FedExCup standings, as well as earn an exemption into The Open Championship and the 2014 Masters. Among the guys he beat that day were this year’s winner of the Valero Texas Open Steven Bowditch, Open winner Shell Houston, Matt Jones and three-time winner this year, Jimmy Walker.

4) Scott Stallings Wins in a Playoff

It didn’t take too long for the Greenbrier to have its first playoff. In 2011, the second year of the event, Scott Stallings picked up his first career PGA Tour victory over Bill Haas and Bob Estes in dramatic fashion. After starting his final round at four-over, Stallings battled back, birdieing the 18th to get into the playoff. The three combatants went back to the 18th tee to decide the championship. Stallings clutched up and hit nearly the same tee shot he had in regulation, setting up another birdie on the final hole. This time, his putt of six feet and change earned him the win.

In a tournament that saw Tiger Woods and Phil Mickelson both miss the cut for the first time in their careers, Ted Potter, Jr. and Troy Kelly got their chance to duke it out for their first win on the PGA Tour. After 18 holes, Potter, Jr. and Kelly were knotted at 17-under. The two remained tied through the first two playoff holes before Potter, Jr. was able to make birdie on 18 and claim his first PGA Tour victory.

As the championship enters its fifth year, the Greenbrier Classic is beginning to be recognized as one of the premier events on Tour, drawing some of the world’s best. In 2012, Tiger and Phil both made the Greenbrier part of their schedules and even though they both missed the cut, lent some credibility to the event going forward. This year, as part of the The Open Championship Qualifying Series, a top-12 finish will net four previously non-exempt players a spot in this year’s Open.

The Greenbrier Classic may only be going into its fifth year, but that’s okay because in its inaugural playing in 2010, Stuart Appleby provided a moment for the ages while collecting his ninth career win on Tour. Appleby shot the front nine in 28, spreading whispers around the Old White TPC Course that he might be able to shoot the elusive 59. With a clutch birdie on 18, Appleby accomplished the feat, becoming just the fourth player in PGA Tour history to have shot that number in competition.