Top 5 Songs of the Summer 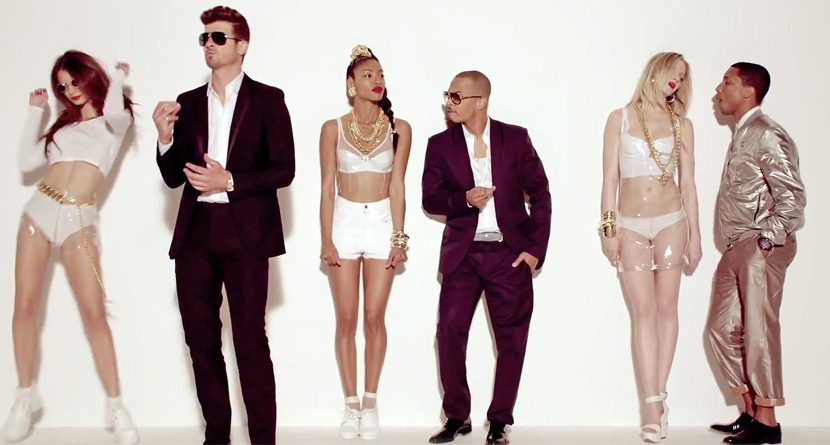 Robin Thicke, you blue-eyed beefcake, you’ve done it! Your infectious song “Blurred Lines” with Pharrell and T.I. is not only the song of the summer, but it’s officially spent more weeks at the top of the Billboard charts than any other song yet in 2013.

That got us nostalgic about the best summer songs of years past and the songs we’d blast on our car radios with the windows down, singing at the top of our lungs.

Sit back and load up your Spotify list because we’ve picked the Top 5 Summer Songs of the past 25 years:

“I Got A Feeling” holds the record as the most downloaded song of all time on iTunes. This was the first song the Black Eyed Peas performed at halftime during Super Bowl XLV after being lowered onto the stage by glowing discs surrounded by people in unisex robot leotards.  Remember that?

If you weren’t hearing this song every time you got in the car, you don’t have kids. “Call Me Maybe” wasn’t just a hit in the United States, it reached No.1 in Australia, the Czech Republic, Denmark, Finland, France, Hungary, Ireland, Luxembourg, New Zealand, Poland, Slovakia, Switzerland and the United Kingdom. It was the best-selling single worldwide in 2012, with over 10 million copies sold in that year alone.

I personally like the music video because there’s a twist.  At the end, her love interest turns out to be gay. And hey, who hasn’t been there before… six years ago… When you dated for 2 months and you thought he liked you… and now he’s engaged to a man.

Speaking of coming out, this song came from Beyonce’s debut solo album after breaking away from Destiny’s Child.  “Crazy in Love” became Beyonce’s first No. 1 single as a solo artist in the United States. The song secured her success in the industry while her booty shorts secured her a place in Jay- Z’s heart.

It’s the song that made all of us well-endowed women finally feel good about ourselves. That’s right, Sir Mix-a-Lot.  I, too, am tired of all these magazines saying flat butts are the thing. The song caused so much controversy for its references to the female backside that it was banned by MTV, the same network that in later years would build entire shows around people lighting their farts on fire.

Even if you didn’t know any of the other lyrics to “Baby Got Back,” admit it, you always nailed the part where he says, “My anaconda don’t want none unless you got buns hun!” We all did.  ”Baby Got Back” held the No. 1 spot on the Billboard charts for five straight weeks during the summer of 1992.

Before Christina was Dirrty, then pregnant, then divorced, then orange, then a reasonable person again, she was our little genie with one powerful set of lungs. “Genie in a Bottle” spent five weeks at the top of the Billboard 100 list, back when we were all illegally downloading it on our computers, burning it onto our CDs and bumping this jam in our cars. Those were the good days. Thanks a lot global warming.

What were your favorite songs of summer?  Hit us up on Facebook and Twitter and let us know.