Top 5 Things Ever Put Into the Claret Jug 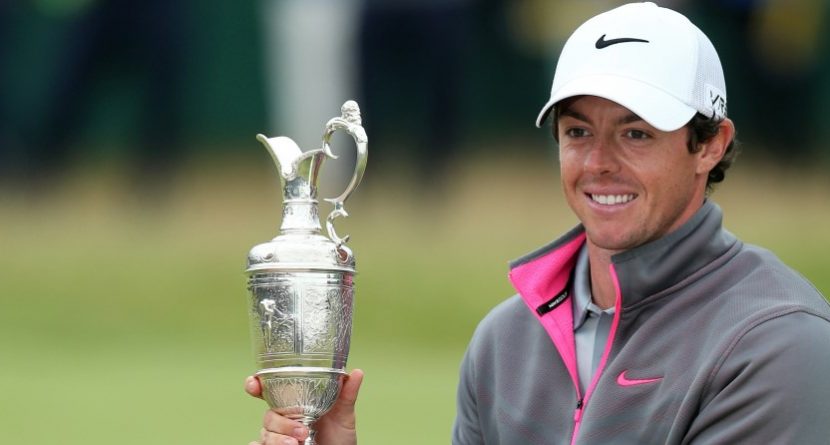 While it took us nearly a year to find out exactly what 2013 Open Championship winner Phil Mickelson put inside the famed claret jug – the prize given for one year to the victor of golf’s oldest major – not even a day passed before we learned of 2014 champion Rory McIlroy’s actions. May we all hope that future Open winners also be, like McIlroy, social media users.

Inspired by McIlroy’s first night with the silver trophy, here are the five best things ever put into the claret jug:

1) Romanee Conti wine – Phil Mickelson
While Mickelson may have kept quiet on what he put into the claret jug, what he did reveal a week before handing it back over to the R&A was fabulous: “There’s been nothing in there that is sub-par. But the best was a 1990 bottle of Romanee Conti wine. It wasn’t on my dime thankfully. It costs about $40,000.” So that is the bar that has been set.

2) Jagermister – Rory McIlroy
In the press conference immediately following his victory, McIlory was asked about his plans for the jug, and it seemed as if he might try to top Mickelson right away. “It’s only right to fill it with red wine first, and good red wine as Phil said. We’ll try to find a good bottle of that tonight somewhere,” McIlroy said.

Judging by McIlroy’s first tweet with the trophy, some red wine was drank – though the kind is unknown, as is whether or not it came from the jug.

Celebrating with the Claret Jug!! Thanks for all the support and well wishes this week! #TheOpen #3outof4 pic.twitter.com/9ZJsV62US0

What did come from the chalice, though, was Jagermeister, that liquorish-like liqueur that you either love or hate. McIlroy and friends apparently love it:

To be fair, there’s no evidence (yet) of McIlroy himself drinking this stuff, but as SB Nation points out, there is past proof of McIlroy downing Jager bombs:

What a week!! Think I’m still drunk! Jaegerbombs out of the Ryder cup! Great banter with euros and Americans last night!

3) Barbecue sauce – Stewart Cink
The trophy’s first social media tour came under the watch of Stewart Cink, the 2009 champion. After he drank some Guinness, after his kids downed some Coke, he basted some barbecue sauce in the jug. “One of my buddies is a huge barbecue guy. I mean, he’s like an authentic smoker of meats. He’s a master,” Cink told ESPN.com. “He wanted to use it to baste a pork shoulder on the Fourth of July. And so during our picnic, he filled up the jug with homemade baste that he uses and we poured it over the smoked pork butt.”

4) Ladybugs – Padraig Harrington
Because of a bet with his manager, Padraig Harrington first poured John Smith’s Smooth Bitter beer in the claret jug after he won The Open in 2007. Later he sipped some whiskey out of it. But the prize was not his alone to enjoy. Harrington and his son, Patrick, spent a lot of time that summer collecting “ladybirds,” so when Patrick saw Dad’s new trophy, he immediately had grand visions for this new bug-collecting canister:

5) Cristal – Todd Hamilton
Todd Hamilton, the 2004 Open Championship winner, wasn’t the first to pop a bottle of champagne and pour it inside the claret jug, but he may have been the first to drink Cristal, a brand that regularly goes for more than $200 per bottle. Upon returning home to Dallas, Hamilton enjoyed the drink that 2Pac made famous while at a restaurant owned by a friend, who gave Hamilton $500 off his bill for bringing in the trophy.

Related Link: Many Things, Like Ladybugs, Have Filled Claret Jug