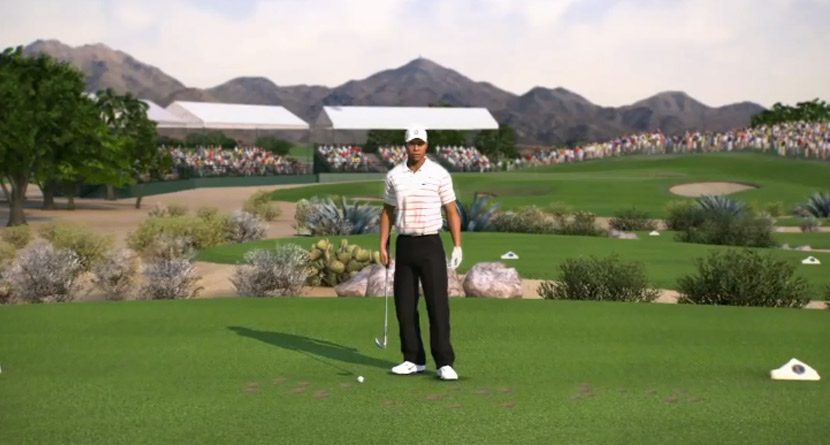 EA Sports will release its brand-new PGA Tour-themed video game in 2015, and early indications suggest it will be incredible. Golf gamers everywhere have been drooling in anticipation for another title to get their golf-gloved hands on, which should make this new installment instantly successful.

The final installment before EA Sports decided on a new direction with its golf franchise, TW 13 featured an interesting game mode that allowed you to play as a (really) young Tiger Woods. In addition, the game featured a number of control updates that forced you to pay attention to swing speed, aiming and timing … just like in real life!

I’m just going to lump all of the HSG games together, because if you’ve played one, you’ve played them all. That’s not a bad thing, of course. These games may have been a little silly to the traditional golf fan, but video games are supposed to be fun! HSG featured in-game power-ups galore, making them some of the most unique golf games ever.

I don’t think there was a video game I played more often than the original Links LS 1998. Like, EVER. I still remember sitting at my parents’ PC, trying my hardest to time my mouse-clicks with the game’s swing meter en route to a 63 at Latrobe Country Club. Future expansion packs included an Arnold Palmer Course Designer, which was revolutionary at the time.

Ok, ok, ok. This was a terrible golf game in terms of controls, features, etc. The game’s title might not have been grammatically correct, either. But all of that combined made this an amazing game. Bandai Golf also featured a split-screen game display that was somewhat innovative way back in 1989. Yes kids; 1989 actually happened.

Golf fans who have always dreamt of playing Augusta National – even if only in a video game – finally had their prayers answered in TW 12. An added “caddie” feature further emphasized the PGA Tour experience, especially when my stupid a** caddie told me to pull a 6-iron instead of a 7. I’m still recovering. It’s a process.

Mario made his triumphant return to the golf course in this title for Nintendo 64. Improved graphics, additional Mario-franchise characters and an insane number of power-ups and shortcuts made this game less focused on golf and more focused on being a ridiculously fun gaming experience.

How can we have a list of golf video games without mentioning Golden Tee? While primarily an arcade game, Golden Tee started as a novelty addition to your local sports bar and has grown into a subculture of its own. Global tournaments are held every year, and gamers can win massive amounts of money (relatively speaking, of course) by just pushing a little white rollerball on the game’s console. It is not uncommon for me to spend more playing this game than on my bar tab.

For many young golf gamers, this was the one that started it all. I got TW 99 as a Christmas present the year it came out for PlayStation and immediately barricaded myself in my grandmother’s basement for hours. While the graphics look choppy and game controls are seriously lacking by today’s standards, being able to play TPC Sawgrass as Tiger Woods was absolutely amazing.

Finally, no other golf game had more influence on my life – and the lives of millions of gamers everywhere – like Nintendo’s NES Golf. This game had everything: the ability to shape shots, competitive head-to-head matches, some fat Mario-looking golfer guy in a white or red shirt, and in-game sound effects that you’ll remember for the rest of your life. I’m sure others will disagree with my placement of NES Golf on this list, but all of those people are wrong.