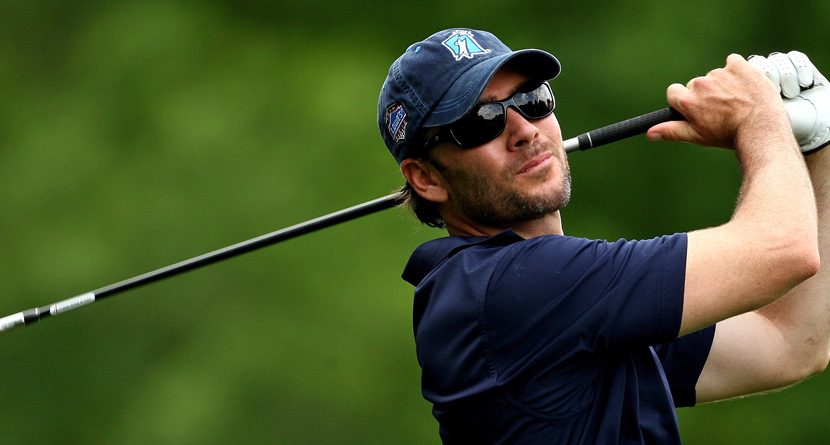 Driving race cars at the top level requires finely-tuned skill combined with a dose of God-given ability, nerves of steel and laser focus. Because of that, it’s no wonder so many NASCAR drivers spend their (decidedly short) off-season on the links. Be it six-time champion Jimmie Johnson playing in the Quail Hollow Pro-Am or Denny Hamlin caddying for Bubba Watson at the Masters par-3 contest, NASCAR drivers are gravitating toward golf like never before, bringing a brand-new group of followers to both sports.

Here is our list of the Top 9 NASCAR Golfers:

While Waltrip wasn’t the first driver to soak up life on the links, he has perhaps been more enamored with the game than anyone else. The two-time Daytona 500 winner has played Pebble, Pinehurst No. 2; he’s played with Phil and Arnie, and taken tips from Butch Harmon and Peter Kostis. Waltrip, who claims to be “about a 20,” is a regular in charity and celebrity tournaments and played with Hamlin in Tahoe this past summer. He and his hall of fame brother Darrell Waltrip host a charity golf tournament in North Carolina annually.

“Happy” as Harvick is known in the garage is coming off a stellar 3rd place finish in the Chase for the Sprint cup this year, and now has an entire two months to focus on his golf game. Harvick, who will move from Richard Childress Racing, where he began his career replacing the late Dale Earnhardt in 2001, to Stewart-Haas racing in 2014. Harvick holds a charity golf tournament every year to benefit the Kevin Harvick Foundation and owns an 18 handicap on the course. The four-time series champ has been known to play a little bit, taking part in charity and celebrity events when time allows, as well as playing in the World Amateur Handicap Tournament in Myrtle Beach, SC. Gordon has 88 career wins at NASCARs highest level and was the youngest winner of the Daytona 500 until 2011 when 20 year-old Trevor Bayne took home the crown. The youngest Nationwide series champion in history and driver of the 55 Aarons Dream Machine next year for Michael Waltrip Racing, is an avid golfer who makes appearances in most driver charity events, as well as a select few celebrity ones with car owner and fellow member of this list, Michael Waltrip. Vickers, who has won three times in the Sprint Cup Series for three different teams, will make his return to the series full-time in 2014; the first time since a blood clotting issue forced him out of the car in 2012.