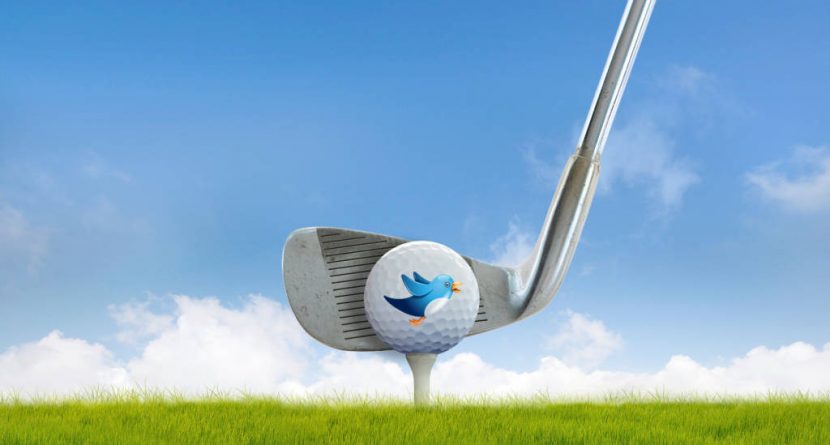 Golf is often criticized for being out of touch with the mainstream, of being narrow, elitist, and generally not welcoming to the masses. Well, criticize no longer, at least when it comes to Twitter, for this is perhaps the most social of all networks, allowing you to decide who you want to follow, giving you direct access to players, reporters, and pundits alike.

If you’re not yet on Twitter and think you have no reason to be there, picture Twitter as a digital stream of consciousness through which you follow only the topics and people that truly interest you. Which, in your case, let’s assume for the sake of argument is everything about and relating to golf.

Fortunately, the golf conversation has exploded on Twitter over the last year, helping create buzz for established and startup golf companies while becoming a primary outlet for breaking golf news.

Half the battle with any new platform is knowing what to do once you get there. On Twitter it’s all about knowing who to follow — we’ll leave you to figure out on your own who to avoid. Having spent close to three years on Twitter via @chapeaunoirgolf, here’s my unranked list of who will keep you entertained, informed, and most of all engaged when it comes to the topic of golf on Twitter.

With the recent release of The Big Miss, this former @TigerWoods teacher is in the news now more than ever. Kudos to Haney for making himself accessible on Twitter during the book release, a time that is surely the most controversial of his career. Haney frequently responds to tweets from everyone and anyone, proving that the swing guru understands as much about Twitter as he does of swing planes.

Everything you love — or, hate — about Paul Azinger in the broadcast tower is exactly what you’ll get from ‘Zinger’s feed, but more of it, with a smattering of his politics. Whether that’s your thing or not, what’s best about Azinger on Twitter is the level of engagement he has with his followers, and the window he is willing to provide into what turns out to be his pretty much regular, though well to do life. How else would we know Azinger likes to take extended motorcycle rides through the Blue Mountains?

Now that he’s Masters champion, Bubba is bigger than ever having added nearly 300,000 followers since his big win. But here’s the cool thing — Bubba was being Bubba with the old wooden stick on Twitter before Bubba was as big as Bubba is now, because Bubba saw Twitter as his direct connection to his fans. Here’s hoping this isn’t going to change now that he’s a major champion, but it says here that Bubba will just keep being awesome. #urwelcome

If you’re looking for something completely unfiltered, someone who will give you a real sense of what it’s like to play professional golf at its highest level, look no further than the outspoken Christina Kim. Kim will take you on long haul flights to exotic event locales, provided there’s wifi on board. Kim caused some commotion after Bubba won the Masters with her frank commentary on what she thought of the new Masters champion, based on her experience. Whether you find yourself agreeing or disagreeing with Kim, she’ll keep you coming back to check her timeline, and you can’t ask for anything more than that.

No one was quicker to jump on the Twitter bandwagon faster than Ian Poulter. Poulter has a well earned reputation for being outspoken, and on Twitter the filter remains off. When you put Poulter in your timeline you’re in for a roller coaster ride — from frank commentary on the state of his game to that of his much beloved Manchester United, and perhaps most intriguingly, glimpses into his garage where he stores his collection of exotic cars. The needling that goes on between Poulter and his fellow professionals is also good fun, revealing that aside from superior talent, they really can be just as juvenile as you and I.

California-based golf course architect and critic Geoff Shackelford is The Daily Show of golf, where you’re the studio audience, sitting there, staring at your monitor in that cube farm your company calls an office. Shakelford’s blog (geoffshackelford.com) has a full time presence on the golfdigest.com home page, but you can monitor his frequent posts is via Twitter to access his personal compilation of everything that’s going on in golf. Shakelford’s commentary is honest, witty, and most certainly sarcastic. If there is one follow you shouldn’t miss, this would be it.

Here’s the heartwarming story of an old school journalist embracing social media and changing his ways. Well, maybe not. Jenkins doesn’t really interact, and he most certainly doesn’t retweet. That just wouldn’t be right. Here’s guessing he has no idea how many followers he has. He has just over 20k. But it’s all good, because we’re just happy he’s on Twitter and from time to time, most often during major events, feels compelled to share his unique views of golf in classic Jenkins style.

Is there a more eloquent media type covering modern golf than Matt Adams? Not likely. Now a Back9Network contributor, Adams is a best selling author and the SiriusXM Radio show host of Fairways of Life. Adams would be worth the follow just for the links to his broadcasts and podcasts alone, but the respectful yet entertaining tone he’s known for on the airwaves translates beautifully into the 140 Twitter character limit. Before you know it, you’ll be hearing his voice inside your head as you read his tweets. Somewhat creepy yes, but comforting at the same time.

There is one and one reason only to follow David Feherty. For the guffaws. The LOLs. Or as he might well put it, for shiggles. Feherty is golf’s ultimate comic relief — but be warned, you will be subject to Feherty’s personal social media ‘experiments’ such as his recent short story indulgence, coming all of 140 characters at a time. Tangentially challenged, Feherty subjected his followers to something that seemed far more novel than novella, primarily due to the medium. Square peg, meet round hole. But if that’s your cup of tea, you’re probably a big Feherty fan already.

From the new crop of golf journalists to emerge in the last two years, Wei made a name for herself on her very candid golf blog weiunderpar.com. A regular contributor to Sports Illustrated Golf+ and the Wall Street Journal, Wei is a senior editor here at golf.swingbyswing.com, and puts the media in social media when it comes to golf, cranking out copious amounts of original content and engaging her followers at every turn.

Jason Sobel is absolutely everything you want from a golf writer on Twitter. He’s smart, entertaining, and informative, and at times pushes the politically correct envelope to the point at which it would tear. Sobel’s tweets will get your attention more often than not, and we like that a lot, because that’s what Twitter is all about, starting conversations. Stirring the pot once in a while to do so, as Sobel does with regularity, makes him a must follow.