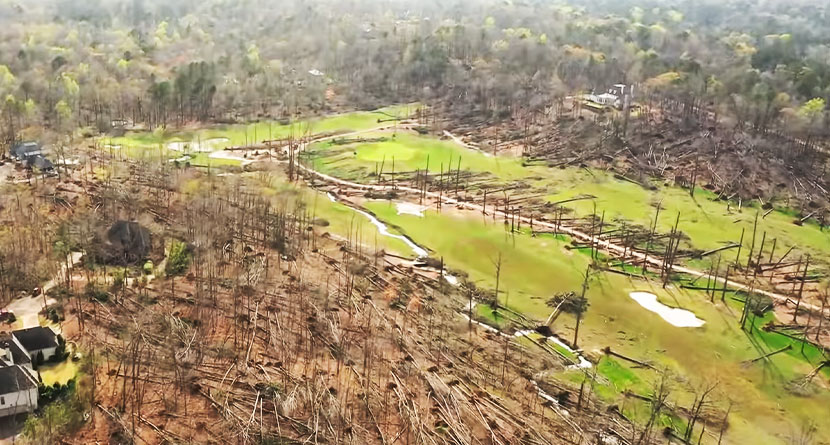 The Shoal Creek Club, host of the 2018 Women’s U.S. Open, multiple PGA Championships and other PGA, USGA, and NCAA events, is in repair mode after a string of deadly storms ripped through Alabama and Georgia last week.

Severe tornados downed trees, damaged homes, knocked out power and killed five people in Alabama and one in Georgia. A reported 14 tornadoes were spotted Thursday across Alabama.

The damage to the famous Jack Nicklaus-designed course opened in 1977 and has been a mainstay on various Best Courses lists.

Meteorologist James Spann share photos of damage to the course, including numerous felled trees, some of which were uprooted completely from the ground.

Drone footage from Live Storms Media gave a wider overview of the extent of the damage to the course and club’s community.

Missouri head women’s golf coach Stephanie Cooper Priesmeyer shared a video of the damage to the course, in particular, noting that Greystone Golf & Country Club just a few miles down the road had escaped without any damage.

Shoal Creek! Glad to hear GREYSTONE had no damage! We will be there April 12th pic.twitter.com/wOge0IisnX

According to USA Today, more than 20,000 people in Alabama and Georgia remained without power through Friday afternoon, according to the utility tracker, PowerOutage.us.

Before and after scenes from Shoal Creek Golf Club after a tornado went though last week. @TheDomino pic.twitter.com/KViOdmpxq4

Alabama Gov. Kay Ivey issued an emergency declaration for 46 counties as the severe weather approached, and officials opened shelters in and around Birmingham.

To donate to volunteer efforts, visit the United Way of Central Alabama.