Trafalgar Square To Be Transformed Into Miniature Golf Course 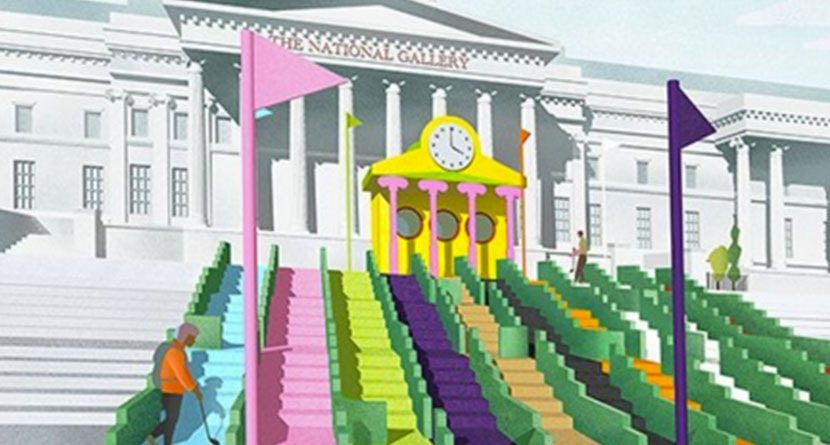 We’ve always thought that the one thing Trafalgar Square is missing is more golf. Thanks to the London Design Festival’s annual takeover of the famous London landmark, LDF has launched a Kickstarter campaign to make the vision a reality for a week in September.

For 1 week we want to take over Trafalgar Square, home to Nelson’s Column and the epicentre of London, transforming it into a crazy golf course designed by some of the world’s most renowned architects, artists and designers. It will be futuristic, functional, fun and free for the public to play.

Paul Smith, curator and ambassador for the project, will transform the steps from the National Gallery into a riot of different coloured stripes, topped by a neo-classical clubhouse that echoes the museum, but has a turf roof and putters for columns. The late Zaha Hadid designed an undulating course with two levels that traces the shadow of Nelson’s Column.

Other holes include Tom Dixon’s, with its funnel and nest of pneumatic tubes through which golf balls will hurtle; a circuitous maze by Mark Wallinger; a netted driving range by the Japanese studio Atelier Bow-Wow; and a cross-section by Ordinary Architecture of a giant pigeon, through whose gut golf balls will travel.

Additional design teams include Camille Walala, HAT Projects with Tim Hunkin, and NEON. Each will create a miniature pavilion that makes an entertaining, playable statement about the future of architecture, filling the square with Pop Art colours and inventive forms that will amuse and inspire both adults and children alike.

For 7 days we want to transform the epicenter of London into a Visionary Crazy Golf course designed by nine of the world’s most renowned architects, artists and designers including Paul Smith, Atelier Bow-Wow, Camille Walala, HAT Projects, Mark Wallinger, NEON, Ordinary Architects, Tom Dixon & the late Zaha Hadid. Supporters of this project will bring about a public takeover of Trafalgar Square, transforming it into a free, colourful and playful arena of crazy golf. Thousands will be able to play the course, and will all interact in different ways with the imaginations of some of the most inventive minds in the world. We need £120,000 to make this happen. Join the Kickstarter! Find a link in our bio. #VisionaryGolf #LDF16 @kickstarter @PaulSmithDesign @camillewalala @pictureneon @ordinary_charles @elly_ordinary @tomdixonstudio @zahahadidarchitects #TrafalgarSquare #CrazyGolf #MiniGolf #Installation #London #Design #Festival #LDF16 #Kickstarter

Transform London's Trafalgar Square into a Visionary Crazy Golf course designed by some of the world’s most renowned architects, artists and designers. Paul Smith, curator and ambassador for Visionary Crazy Golf, said: “All of the designers have been given free rein to be playful, original and have fun. The result will be a wonderful and accessible display, right at the heart of London, which will celebrate design and creativity, and explore engineering and new materials. It will both entertain and inspire. Please help make it happen!” Join the Kickstarter! Follow the link in our bio. @kickstarter @PaulSmithDesign @camillewalala @pictureneon @ordinary_charles @elly_ordinary @tomdixonstudio @zahahadidarchitects #VisionaryGolf #LDF16 #TrafalgarSquare #CrazyGolf #MiniGolf #Installation #London #Design #Festival #Kickstarter