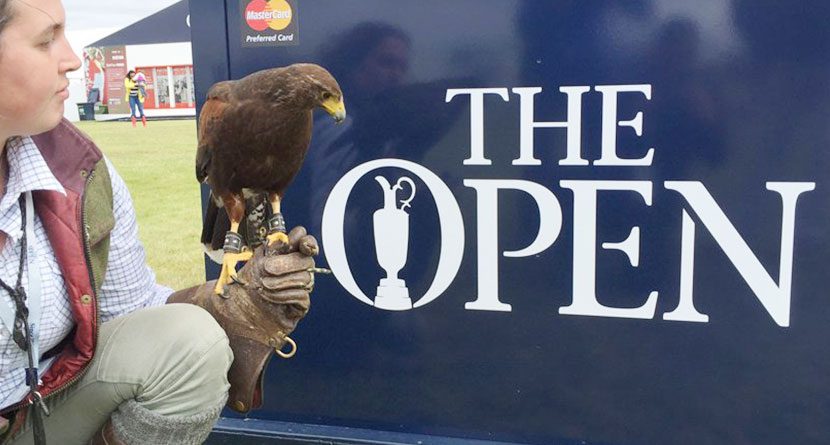 While questions remain as to how the good folks at Oakmont Country Club ridded themselves of every squirrel in Pennsylvania last month at the U.S. Open, there’s no such mystery this week at the Open Championship when it comes to seagulls. Typically a natural accompaniment to seaside links, gulls will be conspicuous only in their absence this week.

This week trained hawks (!) will drive away Troon seagulls without attacking fans (or media) https://t.co/Rcp2CplfF6 pic.twitter.com/4kZ4OFFcQS

Jeff Ritter at Golf.com has the interesting story.


There will be many birdies this week at Royal Troon’s venerable seaside links.

A company called Elite Falconry is supplying trained birds of prey to fly the course and drive away the seagulls, which are notorious for raiding spectator lunches, squawking loudly and creating messes on and around the links.

The beautiful and somewhat intimidating bird pictured here is called a Harris Hawk. It dines on raw meat, but its handler assured GOLF.com that it is trained not to attack fans (or Sergio) this week at the Open.

“Just their presence is enough to drive away all the gulls,” said Elite Falconry’s Roxanne Peggie. “They don’t actually attack gulls, either. They’re focused on us. Wherever we go, they follow us.”

The hawks are making their second Open Championship appearance after being called into duty last year at St. Andrews.