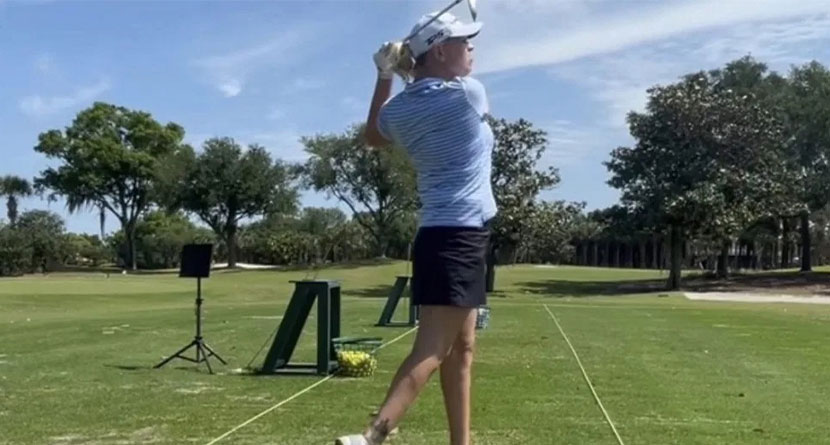 On May 13, Hailey Davidson made a 5-footer for par on the 18th hole to win a National Women’s Golf Association event at Providence Golf Club in Davenport, Florida, beating LPGA Tour pro Perrine Delacour and a field of six other women to become the first transgender woman to win a professional tournament in the U.S.

Davidson has been undergoing hormone treatment since September of 2015, and in January of 2021, she underwent gender reassignment surgery, a six-hour procedure.

While her personal goals have been underway for years, her professional goals are still being decided upon by the LPGA.

Yesterday I became the first transgender person in the world to win a professional golf tournament! It was also my first professional win and I cant wait to get back out there next week! pic.twitter.com/Son4e1aSk4

“We are currently reviewing Hailey’s application to participate in LPGA Tour events under the LPGA’s gender policy,” said Heather Daly-Donofrio, the LPGA’s chief tour operations officer. “The policy is designed to be a private and confidential process between the LPGA and the athlete.”

In 2010, the LPGA voted to eliminate its requirement that players be “female at birth.” However, both the LPGA and USGA had a two-year rule in place that stated a player must have undergone gender reassignment surgery at least two years prior to the entry deadline. Both organizations have since eliminated that rule.

“To be honest, you’re really just putting up a two-year roadblock to hope that we give up by the time that two years finishes,” she said. “That’s all I ever saw it as.”

On the same day she won the NWGA event, Davidson received an email from the USGA that she met the organization’s Gender Policy eligibility criteria and can now compete in its championships.

She had attempted to qualify for the U.S. Women’s Open last month, but struggled down the stretch with the uncertainty of whether or not a qualifying score would be enough to get her into Olympic Club next month. At the time, the USGA had permitted her to play in qualifiers, but no guarantee was made that she could compete in a USGA championship.

“No matter how good I play, it’s not up to me,” Davidson said she thought at the time. “Somebody else gets to decide my fate. As a male, you’re taught to go put your mind to it – you can do it.”

Ironically, the last tournament Davidson competed in as a male was U.S. Open local qualifying in 2015 at Admiral’s Cove in Jupiter, where she lost in a 10-for-1 playoff.

Davidson said she’s lost 9 MPH in swing speed and about 30 yards off the tee since beginning hormonal treatments, according to Nichols. She also lost 90 pounds at the request of her doctor prior to surgery.

“Any advantage that existed is fully gone,” she said.

Now with her sights set on the LPGA, she has a little over a month to decide whether or not she will enter in LPGA Tour Q-School. Transgender athletes must indicate to the tour their desire to apply for LPGA qualifying by June 25. The first stage of Q-School takes place Aug. 19-22 in California.

A roadblock in Davidson’s journey is financial. The first stage of Q-School alone costs $2,500 and there are three total stages for those making it through. She has set up a GoFundMe page with a goal of $25,000. As of this writing, she has raised over $3,500.

“I’m currently a +2.4 index in regards to my handicap have been working with Champions Tour Player Skip Kendal on my full swing and short game,” Davidson wrote on the fundraiser page. “I know I have what it takes from being around professional golfers on the LPGA/PGA/Champions Tour over the recent years and staying very competitive with them all. While I know that I have the talent and mental game to make a career out of playing, the initial cost of tournaments and practice expenses is what truly holds me back.”

Davidson is documenting her journey on her social media channels and believes that if she can get the green light to compete on the LPGA Tour, she can make a difference well beyond golf.

“As cool as it would be the first person to do something, to be honest, right now could not be a better time for me to hopefully keep pushing forward and maybe break out, because there is so much anti-transgender legislation,” Davidson said. “I feel like actually having representation on any professional sports level will give kids so much more hope.

“When I was growing up that didn’t exist.”