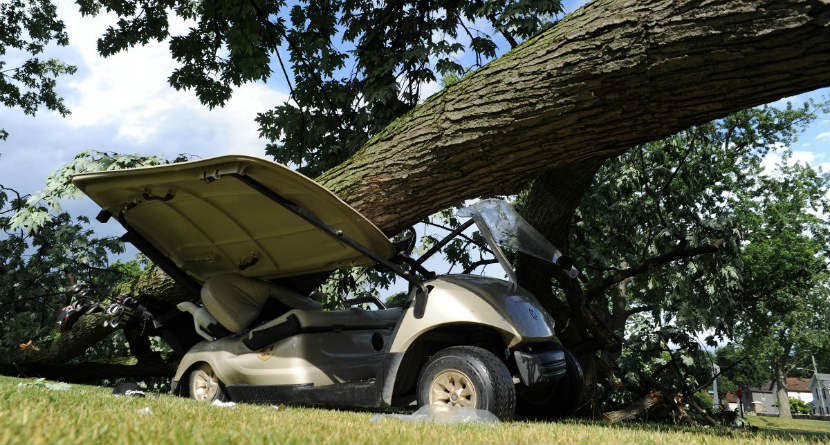 Even when you try to take cover, Mother Nature can find you. A scary scene unfolded at an Ohio golf course on Thursday during a powerful thunderstorm when a massive tree limb fell on a golf cart pinning the driver inside. Based on the pictures, it looked terrifying.

A Bowling Green golfer taking refuge from the storm this evening was crushed by a tree limb and lifeflighted to a Toledo area hospital.

Around 5:15 p.m., two golfers at the Country Club golf course were trying to get out of the rain and took shelter under a tree at the south end of the course. According to Bowling Green Fire Captain Lucas Ward, the golfers almost instantly heard a large limb start cracking.

One of the men escaped, but the other was pinned as the roof of the golf cart was crushed. Tom Garcia, of the country club, confirmed the name of the injured man as Mike Gagen. He was trapped between the seat and the tree. The limb that broke was very large, with the base estimated at nearly four-feet wide, Ward said.

“The tree was very unstable, so we had to be careful to not make the wrong moves,” Ward said. A tow truck was used to stabilize the base of the tree while firefighters used air bags to help extricate Gagen.

Gagen was alert the entire time, was transported to Wood County Hospital, then taken by air ambulance to a Toledo area hospital.