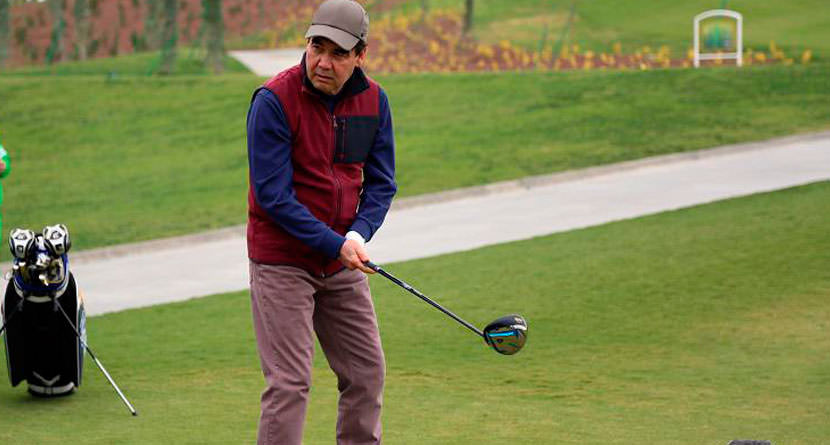 Golf and dictators have a tumultuous relationship. It seems wherever there is absolute rule, golf is either reserved for the ultra elite or banned completely. Turkmenistan can be lumped in with the latter now that a new Jack Nicklaus-designed course has opened.

During the official grand opening, Turkmenistan’s president, Gurbanguly Berdymukhamedov, hit the ceremonial first tee shot, and according to state-sponsored news outlets, he holed it.

Despite scant video evidence, Turkmenistan’s leader was credited with a “hole in one” at the opening of the country’s first golf club. pic.twitter.com/ieoBUZ5QSr

Golf.com’s Kevin Cunningham had some more context as it related to the event and dictatorial golf accomplishments.

Dictators have been known to stretch the truth about their golfing abilities in public, and now the leader of Turkmenistan is no different, according to a report by The Guardian.

Gurbanguly Berdymukhamedov, the president of Turkmenistan, opened a brand-new golf course in his home country last week. On hand was Jack Nicklaus, whose company the leader tapped to build the course.

The Guardian tells us how the government publicized the opening, “In footage aired on the state TV channel Altyn Asyr and published by Radio Liberty, a voiceover claimed that at the opening of the course last week, ‘our nation’s leader hit the hole from 75 metres [246ft]’, despite windy conditions.”

The Guardian notes that there is little evidence this occurred, save for one video in which Berdymukhamedov hits a “seemingly wayward drive.” If this is the case, Turkmenistan’s leader joins some lofty company with his golfy untruths. Former North Korean dictator Kim Jong-il is said to have made anywhere from five to 11 holes-in-one during his first and only round of golf, in which he shot an astounding 38.

It must be mentioned that Berdymukhamedov “has been accused of widespread human rights abuses” since he took power in 2006, and the course appears to be an expensive vanity project for the leader because “there is little appetite for the sport in the country,” according to The Guardian’s report.