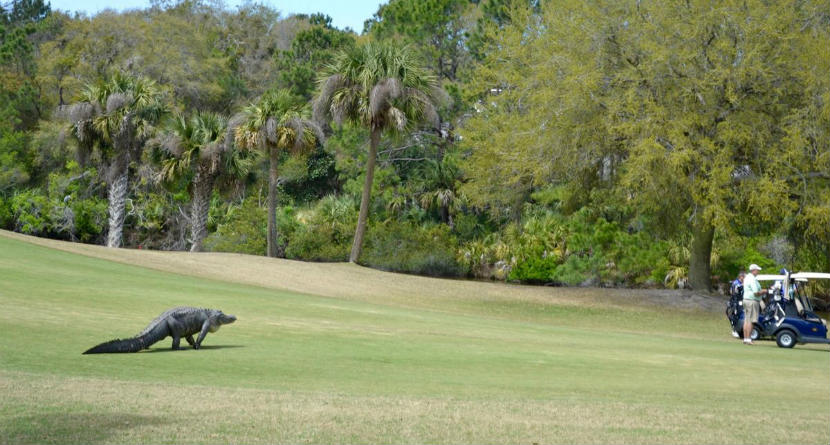 If you’re a fan of alligators, these past few weeks have been right up your ally. First, we had two encounters on the PGA Tour at the Arnold Palmer invitational which prompted very different reactions. Then earlier this week we saw a gator chomp down on a golf ball for lunch. Now, add two more to the total as a couple ginormous reptiles were spotted in South Carolina on courses just miles apart from each other.

The first one was seen at a charity golf outing at Kiawah Island Club’s River course. According to the Post and Courrier of Charleston report, Carrie Moores was taking photos when all of the sudden she saw an alligator heading toward a group of golfers with their backs turned and snapped this epic shot.

“It was literally a dinosaur.” Large alligator sneaks up on golfers at #Kiawah’s River Golf Course. https://t.co/WdUIwsYs9k #chsnews pic.twitter.com/43LEG4Km9M

“I was marching up to the hole with my camera poised to get the golfers’ picture. Then I realized the alligator and I was coming together in a ‘V’ right toward the golfers. I quickly snapped the photo, then ran back to the person who was driving a golf cart for me to see if she knew what the protocol was for an alligator on the golf course,” Moores said. “It was literally a dinosaur. People said it was one of the largest ones they had ever seen.”

We see that gator and raise you another. This huge guy was spotted casually strolling through the driving range at Osprey Point Course golf course, also located on Kiawah Island. Understandably the golfers in the background look stunned.