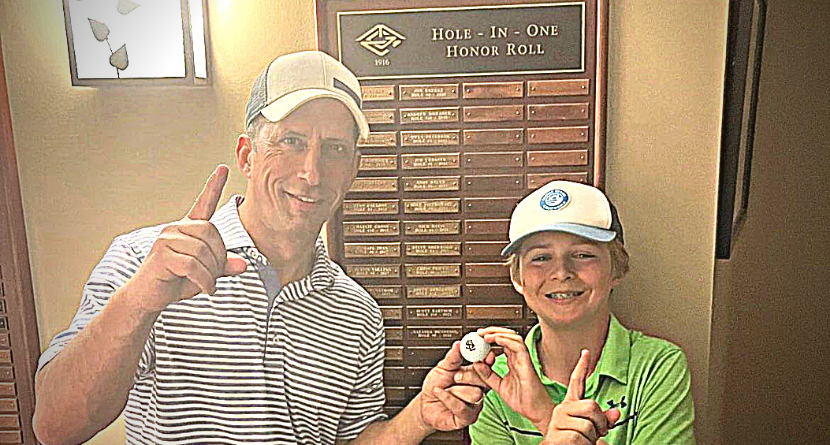 This story is vindication for those of us who can’t help but pocket every scuffed, scratched or muddied golf ball that comes into our path while we search for our own. Face it: you could always use more. And you just never know — the next beat-up Bridgestone or third-hand Titleist you toss in your bag could produce a shot so pure, you’ll be proudly displaying it for a lifetime.

That’s precisely what happened to a pair of golfers at Minneapolis Golf Club last week, only the question of how to properly commemorate their achievement is a tricky one. We’ll explain.

First, 13-year-old Preston Miller came to the 121-yard, par-3 fourth hole and found the bottom of the cup with a 7-iron. The rising eighth-grader — who plays for the varsity squad at nearby St. Louis Park High — had recorded his first career ace with a Titleist 4 Pro V1 emblazoned with the school’s logo (a crucial detail that we’ll get into later).

Then, in a nightmarish twist, Miller used the ball a few holes later and hooked it into a wooded area. He found the ball, but the reunion was brief, as Miller then lost it (seemingly) for good after attempting to play a difficult second shot from out of the trees.

Enter Ricardo Fernandez, who was playing in a group a few holes ahead when he went searching for his own wayward shot in the woods adjoining the seventh and 12th holes and wound up pocketing Miller’s hole-in-one ball. He didn’t play it immediately, but a couple holes later it was looking pretty enticing in his bag.

“It was right on top,” Fernandez told the Minneapolis Star Tribune. “It was a great ball. I wasn’t playing very well so might as well hit this one.”

Using the ball with the telltale school logo, Fernandez proceeded to ace the 181-yard 16th hole. It was the fourth hole-in-one of his career. Word soon got back to Fernandez that he was not the only golfer to accomplish the rare feat on that day — but the scarcity of the event was about to reach another level when he bumped into Miller, who was enjoying a post-round meal in the club’s dining room.

Fernandez, while obviously grateful for his fateful encounter with the ball, was incredulous that the young golfer had put the souvenir back in play.

“You played with the same ball that you hit a hole-in-one with?” Fernandez asked Miller. “Rule No. 1 is you stick it in your bag.”

As for us, we favor the Michael Scott school of conflict resolution. The manager of Dunder Mifflin’s Scranton branch might employ a “win-win-win” solution: make a t-shirt of the ball so that one player could look at it while the other wears it.

But we’ll cut to the chase on the ball’s ultimate fate: Fernandez was happy to return it its original owner. But he had to impart a little wisdom to go with it.

“Mount it,” Fernandez recalls telling his new friend, “and hopefully it gives you a lifetime of luck. Because oh my gosh, there is a lot of luck in that ball.”