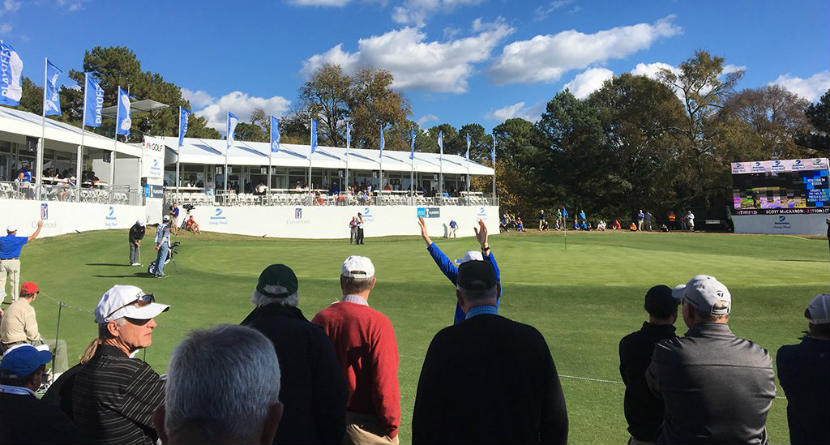 This is why you should never use the King’s name in vain, or commit fraud for that matter. A pair of golf promoters in Colorado were busted for raising $2.1 million from investors to form a pro golf tour of sorts that they claimed was sponsored by the late Arnold Palmer, and then allegedly used some of the money for themselves. Now they are banned from the securities industry and will be forced to pay restitution according to the Colorado Securities Commissioner.

The Denver Business Journal has the full report:

The court orders resulted from a legal complaint filed by Rome last November against the defendants. The complaint alleged that the promoters had violated the Colorado Securities Act through the unlicensed solicitation and sale of investments for a professional golf tour.

According to Rome, Lunsford formed NPGT in 2009 to produce professional golf events. The company hired C.H.A.M.P to raise $250,000 as start-up money.

Rome’s complaint said that Pebley began soliciting funds and issuing promissory notes telling investors their investments could yield 10 to 15 percent returns quarterly and were “low risk” because the tour was sponsored by Palmer, who died last September.

But Rome says C.H.A.M.P was not a registered broker-dealer, Pebley was not licensed, and the promoters made multiple misrepresentations and omissions while soliciting funds for NPGT — namely, that the investments were high-yield and low-risk due to sponsorship by Palmer.

Rome said Palmer’s name was authorized for use by NPGT because the company agreed to use a certain number of the golfer’s golf courses during the tour. But, he said, this did not constitute “backing” or “sponsoring” the tour.

Should the golf promotors fail to pay the $30,000 within the specified time period, the court order stipulates that they will then be jointly responsible for the full $2.1 million in restitution to investors, Rome said.