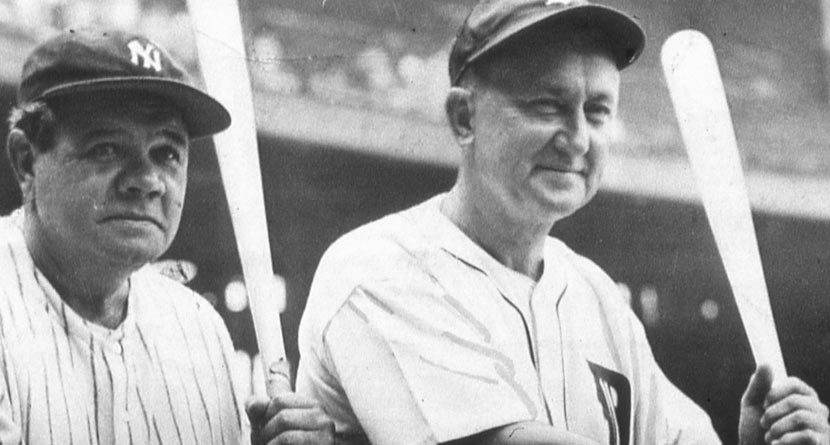 Babe Ruth and Ty Cobb are forever linked in baseball lore. During the 1910s and the roaring 20s, no two stars were near as big as Ruth and Cobb. In 1941, they took their rivalry to the golf course.

The two baseball giants went head-to-head in a charity, best-of-three golf tournament. Cobb and Ruth contended the matches over the summer of 1941 in Newton, Mass., Flushing, N.Y., and Detroit, Mich.

Much like their time on the diamond, their relationship in the golf matches sat somewhere between respectful and contentious. According to The Sporting News (via Bob Lemke’s Blog), neither player really engaged in much conversation. Perhaps it was due simply to the fact that they were two fierce competitors locked in battle. After winning the first match, Cobb said, “In all my life I never competed under such pressure. In my 25 years of baseball, I never had to bear down as hard as I did in that match.”

For taking the first showdown, Cobb was presented a silver cup, donated by actress Bette Davis. “I beat Ruth and so I have something good to tell my children. I have finally beaten the Babe at something,” Cobb said afterward.

Ruth would win the second match in New York, but despite poor play from both men in the third and final match, Cobb was able to hold off Ruth and win the best-of-three series. The match ended on the 16th hole with Cobb winning despite being “15 strokes over par.”

Admission for the events was a just a buck and the matches benefited the Golden Rule Farm for boys in Franklin, N.H., and the United Service Organizations.

The famed Yankees slugger, Ruth set nearly every power hitting record of the day and put in place benchmarks that lasted well into the 1990s. Cobb was arguably the most fierce competitor the game of baseball had ever seen, holding the all-time record for hits until Pete Rose eclipsed him in 1985.

In 1936, Cobb and Ruth were near unanimous choices for the inaugural class inducted into the Baseball Hall of Fame.