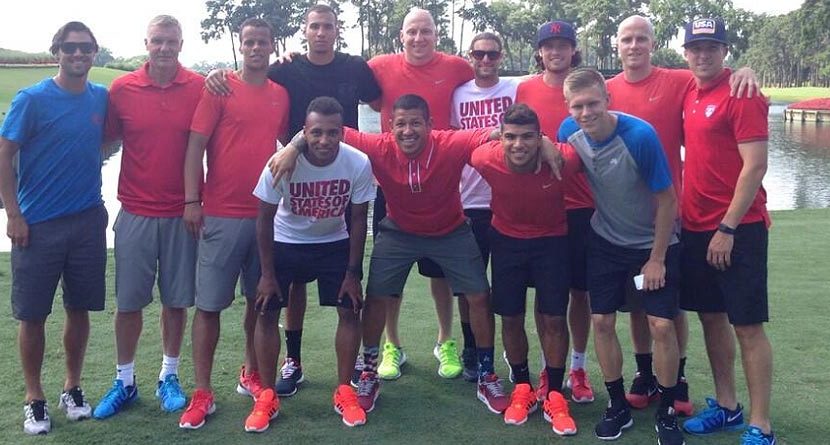 With the World Cup set to kick off on June 12, squads from around the world are getting in some final friendly warm-up matches before taking the big stage in Brazil. The final stop for the U.S. Men’s National Soccer Team brought it to Jacksonville, Fla., where it will face Nigeria on Saturday.

Before the match, the team decided to pay visit to one of golf’s most legendary courses: TPC Sawgrass. The team received a tour of the Champions Locker Room before heading to the tee box of the famous 17th hole island green.

The @ussoccer team is in #THEPLAYERS Champions locker room pic.twitter.com/E3fmYw9oUz

#USMNT are getting a first class tour of @TPCSawgrass before playing the famous par-3 17th. Who will hit the green? pic.twitter.com/83J9mJp3RL

Was at @tpcsawgrass locker room today and came this close to meeting @tigerwoods pic.twitter.com/AREoQf4pAh

As expected, the players were excited to get their shot at the island green, asking for tips and just hoping to hit the ball, never mind the green.

Tee off at hole 17 @TPCSawgrass in a bit!! #holeinone #FOR

Anybody have any pointers for hole 17 at @TPCSawgrass ?

Johannsson wasn’t the only player to find the water. Defender DeAndre Yedlin whiffed on his first attempt, and hit his second attempt into the hazard.

Three players did find the green, however. A job well done by Brad Guzan, Mix Diskerud, and Michael Bradley.

Forward Chris Wondolowski plans to keep his day job as a professional soccer player after finding the drink twice.

Very disappointed that I put 2 balls in the water @TPCSawgrass. Such a fun hole and thank you for having us out. #alotharderthanitlooks

I do love golf but I am for sure sticking with day job. 130 yards away is way too far I need to be 18 yards and in.

Here are some other photos of the team’s visit to TPC Sawgrass:

Thanks @TPCSawgrass for giving us a tour this afternoon. Had some fun on the 17th! pic.twitter.com/eA6V4C4lD4

And of course, the team drove off in style in its coach bus.

Good time had by all, thanks @TPCSawgrass! Now it’s back to work for the #USMNT. pic.twitter.com/FLtJyjbWWy