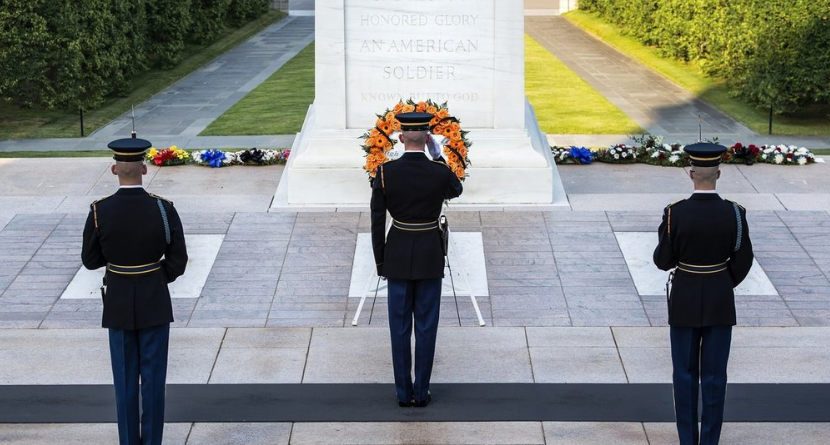 A U.S. soldier was seriously injured when an altercation broke out on a golf course leaving him with a broken leg after being run over by a golf cart. What a world.

Drew Glover, a 35 year-old U.S. Army Specialist, was playing golf with a buddy back on August 12 at Osceola Golf Course in Pensacola, Fla. while listening to some music when they were approached by 50-year-old Vicki Meloy and three males asking them to turn it down. The accounts differ on what happened next, but the result was physical altercation between one of the males in Meloy’s group and Glover’s friend. The escalation led to Glover being run over by a golf cart driven by Meloy.

The Pensacola News Journal had the report:

Meloy said she was driving over to break up the fight when she accidentally hit Glover with her cart. According to the report, Meloy said she tried to stop before hitting anyone, but the cart slid into Glover when she hit the brakes.

Officers at the scene noted there were no slide marks at the scene indicating Meloy had tried to stop. The report also said that two of Meloy’s associates showed signs of intoxication at the time of the incident, as both smelled of alcohol, had bloodshot eyes and occasionally slurred their speech.

Glover, a U.S. Army specialist, told police officers that Meloy’s group had approached him and his friend yelling racial slurs and instigated a fight. He alleged Meloy came down the path in the golf cart and hit him intentionally. He was momentarily pinned beneath the cart, but he was able to push the vehicle off. Glover suffered breaks to his fibula and tibia, the two major bones in the lower leg.

Glover’s parents said he has undergone multiple surgeries since the incident.

“That leg is in terrible shape,” Glover’s father, Steven, said. “He’s in a tough place. He doesn’t know what it’s going to do to his Army career.”

Glover previously served as a sentinel at the Tomb of the Unknown Soldier at Arlington National Cemetery in Virginia.