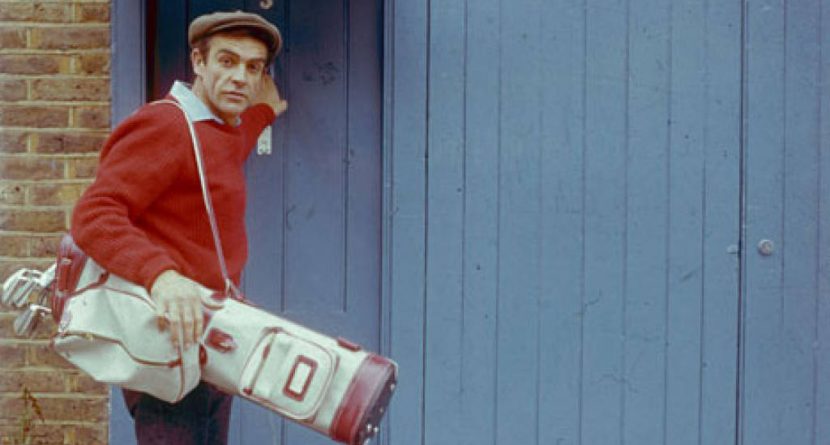 The most iconic golf style photograph I can think of is one of Sean Connery, circa 1962, sporting a driving cap, and a vibrant red jumper paired with turned up denim, with a golf bag slung with style over his right shoulder.

That’s right, denim, aka, the kryptonite to golf clubs near and far.

So here we have Connery, the Bond who spoiled it for all other Bonds between he and Daniel Craig, coming from or going to the golf club. Do you think there’s a club professional alive, or perhaps dead, that would tell the best Bond of all time that his choice of trouser was unacceptable on their links? Highly unlikely.

But exactly what is it with golf’s dress codes, and why is it that denim has been widely banned from high end private facilities to municipal tracks alike? What exactly have we been afraid of here? An overwhelming invasion from the proletariat?

Frankly, yes, that’s exactly it. Let’s keep out the riff-raff shall we? Pfft!

Denim’s early association with the common working man was a likely dress code catalyst, for the man who gets his hands and his trousers dirty during the course of a day’s toil surely isn’t the type of folk with whom we should associate. Right? Surely there would be nothing more unsavoury than to see the result of a hard days work front and center on the first tee, or strolling through the grill room for that matter.

Later, denim’s ongoing association with pop culture was a likely motivation behind the ban. Wild youth and all. Ruffians every single one of them, with their rock and roll and complicated shoes.

Ask any well heeled country club member as to their anti-denim stance, and he or she will likely respond using words like ‘tradition’, ‘respect’, and ‘etiquette’, or will simply state ‘that’s just the way it is’.

It goes without debate that tradition and respect are both wonderful things, and there’s every reason to maintain them both when it comes to golf. But do we really need to be overbearing zealots about it? Similarly, golf etiquette should be preserved, and even celebrated, as it is a large part of the appeal of the game. Proper etiquette is not entirely unlike a security blanket for golfers, helping us feel at home wherever we may tee it up. No need for changes there.

Perhaps it is the very nature of those who play golf to be fastidious about everything that surrounds the game. We’re constantly tinkering with our games in a life-long effort to lower our scores — modifying our stance, our grip, and our posture; adjusting weights in our drivers, adding a critical extra layer of tape under our grips. But where we have failed control our slice and lower our scores, we have latched on to that which we can control, extending our obsession to govern even elements of lesser impact, from which the creation of a strict dress code is one of the results.

We’ve all seen the signage telling us about the need for collared shirts, shorts of a certain length, socks of a certain type, and of course, no denim. Or singlets. Don’t ever forget the singlets.

In many respects, golf’s dress code has had just as much to do with turning people away from the great game as have more commonly cited factors such as time and cost. These arbitrary apparel edicts have erected mercerized barriers to accessibility, dictating uniformity in an effort to homogenize the collective.

While this is not a call for a complete reexamination of why we do things a certain way on the golf course, it is a call for common sense when it comes to what someone is wearing — and this is coming from a guy who’s as obsessed with golf style as you’ll ever find.

Fortunately, there are so many more options through which golfers can express themselves.

Golf apparel brands have recognized there’s room for everyone in the game, and companies such as Dunning Golf and Hugo Boss have marketed a five pocket golf pants with ‘jean cuts’ in recent years. If done right, there’s no reason a golf denim shouldn’t work. Shouldn’t it? I know I’d wear them for a late season round or two.

So let’s keep our eyes on what’s really important, let’s preserve everything we love about the game of golf while we strive to welcome new people into the game — and let’s let them know that it’s ok to express their individuality, regardless of dress code. Well, provided they do it with style of course.