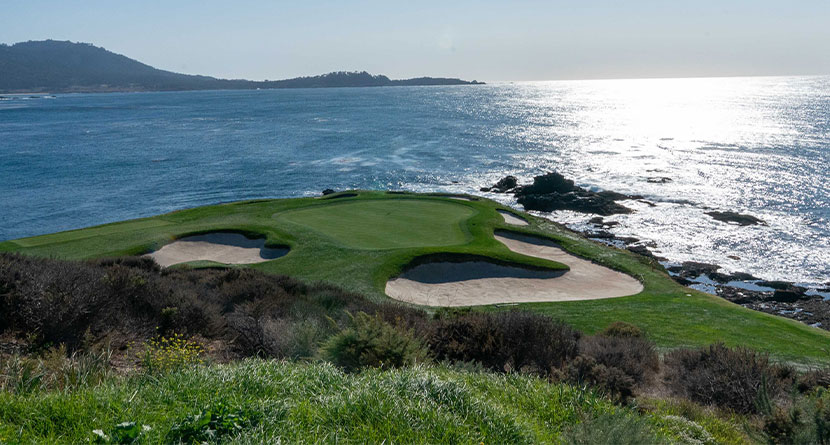 We’re always told that the season of giving is about the thought put into the gift, not the gift itself, and rarely does a portion of the population truly understand this sentiment more than golfers.

Let’s face it: we’re a different breed of “hard to buy for.” We have our quirks and preferences based on brand, past memories and ridiculous superstitions, so when a well-meaning, spouse, family member or friend thinks they really hit the jackpot with a golf gift, most of the time we’re left offering a cursory smile and a half-hearted (but fully intentional) “you shouldn’t have.”

Cornering the market on this holiday tradition are the guys over at No Laying Up who year after year put out “unusable golf gift from your non-golfer relative” pictures.

Receiving hundreds of replies, rarely does the thread disappoint, but one of the best of the worst of 2021 came from Steve Wolf, a high school technology teacher from just outside of Cincinnati, Ohio. Wolf shared a gift certificate from his sister promising he and his father a complimentary round of golf at Pebble Beach Golf Course, on a to-be-determined date with the cost covered by the family.

Sister meant to give my dad and I gift card to Pebble Creek in Cincinnati, instead she typed Pebble Beach. My dad started to cry until she realized it and corrected it. 🤣☹️ pic.twitter.com/DbKyRZcYRB

That’s a pretty awesome golf gift. So awesome, in fact, that Wolf reported his father began to cry upon receiving it.

The catch? There’s a public course in Cincinnati called Pebble Creek, a 6,100-yard municipal golf course that winds through a residential neighborhood. It’s a fine public track, but Pebble Beach Golf Links, one of the most picturesque golf courses in the world and host of PGA Tour events & major championships… it is not.

Realizing the emotion a round of golf at a local golf course elicited was no on par with the expectation, Wolf said his sister knew something was off and broke the news to her father that she had accidentally swapped “Pebble Creek” with “Pebble Beach.”

After overcoming the initial shock and disappointment, Wolf reported the family will “laugh about for a while now that (they’re) over it.”

While the Pebble Beach/Creek gift was one of the big hits of the unusable gift thread, there were plenty more to chuckle at, such as a scorekeeping beer koozie, ball-finding sunglasses and of course, the Potty Putter.

Here are some of the best of the rest.

Don’t even need to pull my scorecard out of my pocket anymore. Really admiring the utility here pic.twitter.com/UNNxhfUs6B

My name is Mike… pic.twitter.com/pBKXC3nGlR

My girlfriend got these. Honestly no idea of what's going on. Best guess is duck-themed winter tires but that's a preposterous idea so we still have no clue. Perhaps just an objet d'art. pic.twitter.com/ezSmnTr60Q

Finding fairways is now a must pic.twitter.com/6MStpi3Z1P

The dog looks so, so happy. Video of me using it forthcoming. pic.twitter.com/rrbHGKtkw9

I mean… how does this one ever get beat??? pic.twitter.com/lTRUkASQOQ

What we have here boyz, is a used used 3 woods turned paper towel holder. Family sent it with partially used paper towel roll on the rack to eliminate any confusion as to what this is supposed to be. pic.twitter.com/atai69lWwY

Got these. Looks like they went to the range, picked the 6 worst balls they could find and packaged them as a gift. pic.twitter.com/kjHftiaULC