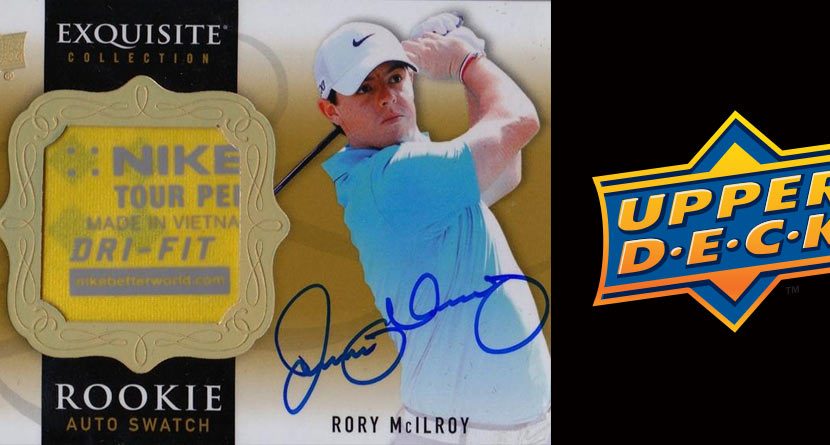 In 2001, while Tiger Woods was busy finishing up the “Tiger Slam,” UpperDeck — the trading card company famous for its industry innovations like cards featuring game-used materials in 1997 — was busy changing the card-collecting game again. With the introduction of UpperDeck Golf, the company brought fans closer than ever before to the most recognizable athlete in the world.

UpperDeck Golf  was one of the most highly sought after sets in the entire industry. People with little to no interest in the set gobbled up packs in the hopes of pulling Woods’ rookie card or — even more rare — a Woods autograph. Now, the company has released another must-have collection: 2014 UpperDeck Exquisite Golf. The set was made available to the public on July 29, with packs fetching an average of $600. Each pack contains five autographed cards, including ones from the game’s greatest players — including Jack Nicklaus, Arnold Palmer, Tiger Woods and Rory McIlroy.

“Upper Deck’s position as the leader in the sports card and authenticated collectibles industry will undoubtedly be bolstered by the unveiling of our new 2014 Exquisite Collection Golf line of cards,” said Jason Masherah, president of Upper Deck. “Having super-premium autograph rookie cards of Rory McIlroy … only adds to the excitement around this release. A classy sport deserves a sophisticated and innovative product like this.”

Images of lucky folks who pulled some of the marquee cards in the collection were showing off their stuff — rightfully so — on Twitter. As you might expect, these gems are nothing short of drool worthy:

If those aren’t enough and you really, really want to be overwhelmed, take a moment to watch a “box break” of these things or cruise eBay for a couple minutes. You can actually find some steals (Ben Crenshaw autograph for $4, Corey Pavin autograph for $9.95) on there. That being said, you’ll also see a whole bunch of prices and pieces of card collector heaven that will make you want to cry.