Should You Use A Line On Your Ball To Putt? 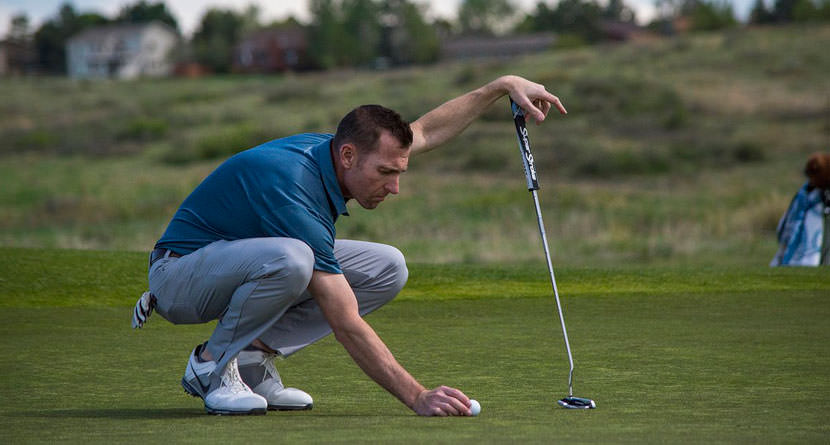 The secret to the full swing may be in the dirt, but to figure out the key to good putting, there are as many theories as there are golfers. While many of us try different stances or grips, there does seem to be only two camps on the putting green: those who use an alignment line on their ball and those who don’t.

The reasons for both hold water. Using the line locks you into a good starting position and forces you to pick a line. The same things that make the alignment line beneficial can also be detriments because standing over your ball and not liking the line you chose creates indecision, which takes your mind off of the task at hand.

So, which method is better and more importantly, which method helps you to make more putts? The folks at My Golf Spy answered that question the only way they know how: with unbiased testing.

The chart below shows the breakdown of the total number of putts necessary to complete the 100 holes played at each distance (300 holes total per putter). Total counts, as well as per hole averages are also displayed. The SG18 number represents the number of strokes gained or lost over 18 holes as a result of marking or not marking the golf ball.

– From 5 feet the testers putting balls marked with a line finished the test in two fewer putts.

– From 10 and 20 feet, the unmarked balls required fewer putts to complete the holes.

– Under our SG18 methodology, marking the ball with a line contributes to 1 lost stroke per every 6 rounds of golf played.

– Testers mentioned that from 10 and 20 feet, their focus on the line impacted the pace of the putt. There was a noticeable trend that from greater distances, distance control was worse when balls were marked with a line.

So, as a player what can you take from this data to help your game?

Basically, using the line, especially from distances of 10 feet or more, likely does little more than annoy your playing partners.

Our test revealed that marking the golf ball with a line (as 70% of our test participants reported doing) provides no statistical advantage whatsoever over putting with an unmarked ball.

There you have it. Using a line on the ball, especially the farther from the hole you get, yields little to no returns. But as it is with anything in putting, there are “no absolutes,” which putting guru Phil Kenyon explains in more detail.

Here is something relevant for the 528 people that took the poll and answered with "I use a line on the ball" #PuttingSolutions pic.twitter.com/Gwmt2UVXHD