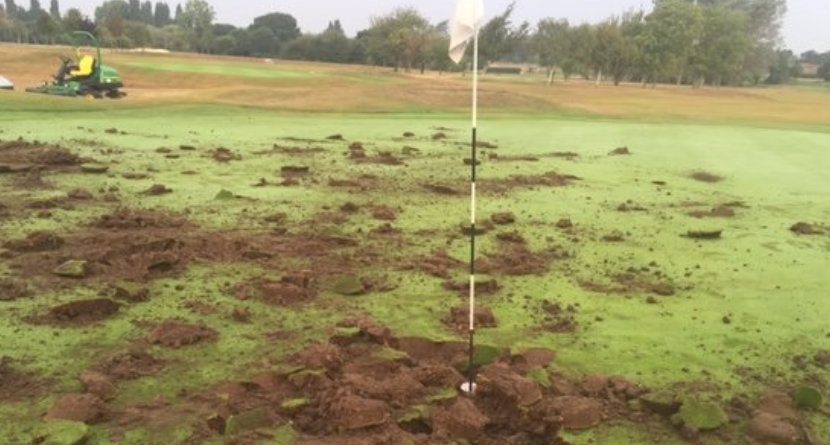 It seems like almost everyday there’s a new golf course that’s vandalized. Recently, we’ve seen greens getting torn up by cars and golf carts being destroyed, but this one is different. The weapon of choice: shovels.

The Basildon Canvey Southend Echo has the full report:

Vandals dug up the turf on two pristine golf greens- just days before an Essex-wide tournament is due to take place.


Groundsman were devastated when they arrived at Rochford Hundred Golf Club, in Hall Road, Rochford, on Monday morning to find someone had used a shovel to dig up earth on the 5th and 16th holes.

Roger Fearn, director of operations, said club bosses are speaking to insurers about the vandalism, which could cost hundreds of pounds to put right.

He said: “David Rand, the head groundsman, is devastated, as are his staff. They work exceptionally hard and it’s a difficult time at the moment because of the lack of water.

“They do a magnificent job for us.

“It isn’t the first time we have had vandalism, but nothing to this extreme.

“But life goes on, we have got to be positive and get it put right.

“We have had tremendous support from other clubs so it certainly brings the golfing community together when something goes wrong.”

Here’s a look at the aftermath:

All we can do is shake our heads.