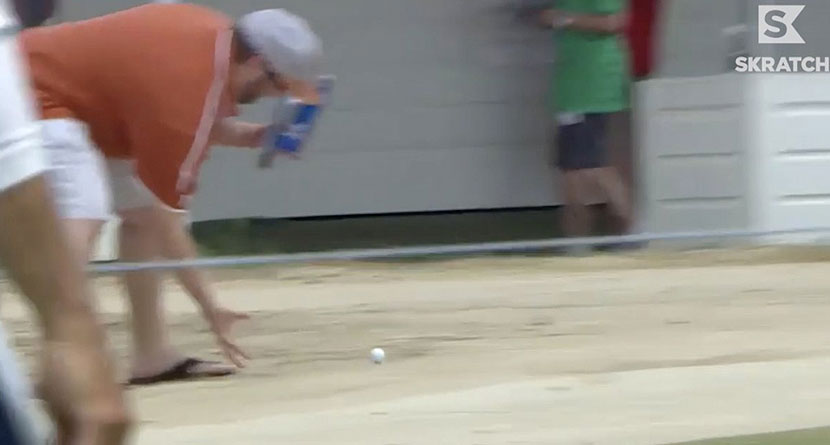 Jordan Spieth had great advice this weekend for fans coming to the AT&T Byron Nelson at Trinity Forest.  The new course doesn’t have any trees, and the sunlight can take a lot out of fans watching the tournament for eight-plus hours. Spieth, the hometown boy, said the best way to get through hot weather is to lay off the sauce.

A Texas Longhorns fan didn’t get the memo on Saturday afternoon.

A wayward drive from Brian Gray went off the fairway when a fan promptly picked up the ball like he was fielding a ground ball.  Yes, a golf ball came at a golf fan on the golf course during a golf tournament, and he picked it up.

Don’t be that guy. pic.twitter.com/AgIgg5uAjE

That wasn’t even the best part of the fiasco. It didn’t take long for the fan to realize his error. He proceeded to drop the ball like nothing happened, take two steps and then take a swig of his beer.

The penalty for playing someone else’s ball on the course during a tournament is stiff, which is why we recommend always marking your ball.

What are the penalties for a spectator grabbing a live ball at a golf course?  Well, immortalized as the moron of the day is a start and probably a stern talking to from the woman with whom he was attending who gave him the evil eye for picking up the ball.